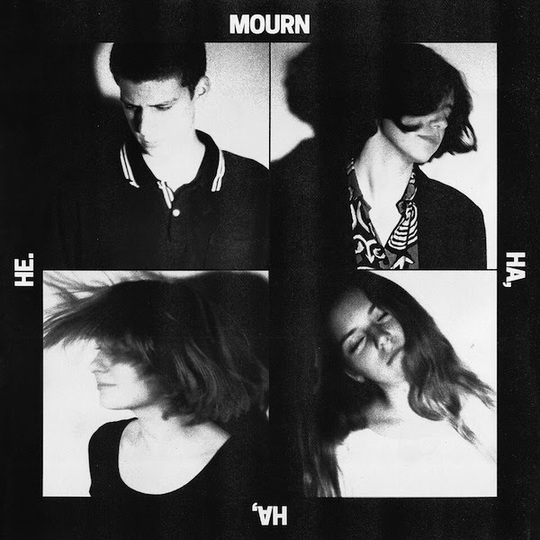 Mourn were never going to be just another indie band. Their self-titled debut album from 2014 was full of hints to this effect, if you were listening. On Ha, Ha, He., however, their uniqueness manifests itself no longer as hints but as a central fact of the album.

That they’ve grown more unique is evident from the opening track. A risky choice opening on an instrumental, ‘Flee’ definitely pulls it off. Starting as they mean to go on, the guitars of ‘Flee’ twist and shimmer through the air in gorgeous deep pink, complemented by the rhythm section switching between jagged, stop-starting tension and releases of driving fluidity. All the songs are just short enough that each one feels like a dreamlike idea floating by, the next completely different one starting, just before you’re able to grasp it. Its pace goes from driving to floating to wandering to driving again so that you never settle into it. It refuses to melt into the background.

The whole album is a gorgeously rich experience that knows just when to hold its tension and when to release, when to swell and when to ebb. The punchy experimental post-punk of ‘Evil Dead’ is followed by the gorgeously melodic and wistful ‘Brother Brother’, which in turn leads into more angular guitars in ‘Howard’; so the album continues, wrong-footing the listener at every turn so that the hooky, accessible songs sound just as curious as the more 'experimental' stuff in the context of the album. Not only are the moments of tension often chaotic and dissonant (see ‘Evil Dead’ and ‘Storyteller’), but so too are some of the hookier tracks. Their use of cross rhythms in ‘Second Sage’ sounds just as chaotic but also extremely satisfying.

Their sense for lyrical hooks is spot on too, from the punchy, grabbing “Feast on your soul” of ‘Evil Dead’ to the tuneful playful irony of “Hilarious” in ‘Howard’, to the grave warning “Nobody’s exempt from the unexpected”. Not all of these songs feel like they mean a whole lot, as the lyrics for most of the verses don’t particularly stand out. However, there’s a lot of really wonderful lyrical moments to be found, like the poignant, pleading advice in ‘Gertrudis Get Through This’: “If you need someone to trust / You don’t have to involve / A body and a hole”, which feels like an urgent message to a vulnerable person, or quite possibly a vulnerable self. The punky, self-affirming ‘Second Sage’ has a wonderful refrain too - “I’m saving the world / And I’m good at it”, deliberately, self-consciously and joyously childlike with its imagery.

On closing track ‘Fry Me’ it feels like the band is as sad as I am that it’s nearly over. By far the longest song, it actively, almost aggressively resists any sense of resolution. The instrumentation feels like the band are trying actively not to gel, so your attention as a listener is yanked and pulled every which way, with the drums sounding too close and full of cymbals. Ending on a crashing waterfall of an outro and coming in at just under 27 minutes, Ha, Ha, He. leaves the listener desperate for more.