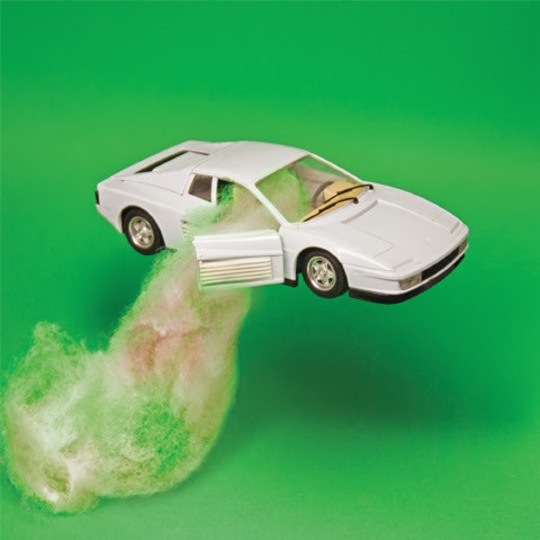 We’re told that you shouldn’t judge a book by its cover. The same is true for albums. I dread to think how many times I’ve been digging in a shop and come across an interesting cover and immediately thought 'I have to have this'. If you were in your local record shop and came across Yoni & Geti’s Testarossa album, you’d definitely pick it up! Against a green background a white toy Ferrari Testarossa hangs in space while what looks like candy floss spews from its open door.

The music is as lurid and surreal as the cover, but this is what we’ve come to expect from Yoni Wolf and Serengeti, bearing in mind they were in cLOUDDEAD and Cavanaugh respectively. ‘Umar Rashid’ opens the proceedings with eerie beats, mournful piano and sultry synths. Lyrically it’s easy to tell that Yoni and Geti aren’t in the best frame of mind. ‘Allegheny’ carries on this feeling. Everything is downtempo, almost ambient at times. Yoni and Geti’s verses are delivered at breakneck speed one moment and then beautiful crooning. The lyrics have a stream of consciousness vibe to them, exemplified by lines like “Charge my phone, let me call my home, let me eat this scone”.

‘Madeline’ is the hookiest thing here: the music pulls us in with catchy melodies, and the lyrics are half sung/half spoken and have a lullaby quality to them, but instead of lulling us into a stupor, it keeps drawing us in with popping beats and inventive wordplay. ‘Frank’ is one of the stand out tracks on Testarossa. It is chocked full of laidback catchy hooks and has the closest thing to a conventional chorus on the album “F is for my buddy Frank. U is for growing up, B is bandana, U is for umbrella. Met a woman called Ella, Used to be a feller, We were on sassafras, She was my Cinderella”.

It’s around this point that you start to realise that there is an underlying concept. Maddy and Davy are lovers and have children. Davy is in a band and goes off on tour. While he’s away Maddy has to try and make ends meet and gets a job as a cocktail waitress. She gets lonely and has an affair with Davy’s ex best friend and band mate. I won’t tell you how it ends, but you probably get the idea.

Testarossa is an album that gets better with each listen. At first is all seem random and nothing appears to make sense. Yes you’ve enjoyed it, but the overall point appears to be missing. The music doesn’t seem to have any relation to the lyrics' subject matter, but then it all clicks and you start to pick up on recurring themes: the sadness and regrets of the breakup of a relationship; sin and repentance and ultimately redemption. All this is underpinned by darkly comedic lyrics and scenarios – think Mike Leigh and you’re on the right track, delivered only as Yoni and Geti can: with flawless timing and straight faced panache. So can you judge an album by its cover? In Testarossa’s case, it’s not even close.