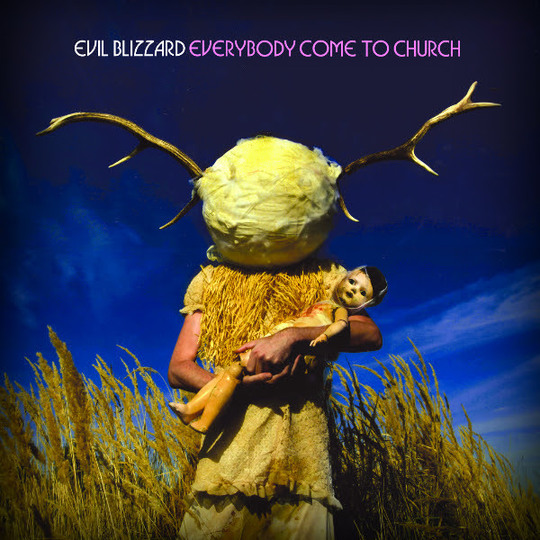 Trepidation and curiosity are two things that I can often approach an album with but rarely has it been in the quantities that come with Evil Blizzard’s Everybody Come To Church.

That’s because Evil Blizzard might just be the weirdest thing to come out of Preston since we started having a funeral procession if a football team got relegated (although local band Hello Bamboo might/probably have something to say about that).

Still, while Rae Morris might have very strong links to the city, Evil Blizzard represent our only real shining light on a national level. We’ve not really got anyone else bringing out music to an audience of a similar size. So if, as a Prestonian, this means I need to don the mask and try to embrace the hate then let’s go for it.

This isn’t the first time I’ve had to review a band that wear masks on stage (and again, I’m ignoring Preston’s Hello Bamboo) because I caught Slipknot over the summer. This might seem like an obvious and predictable comparison to make but it’s their differences that really stick out. Sure Slipknot also cover their faces and have a love of the word evil, but focus purely on the music and it can seem like the least interesting thing about them. You can’t make that accusation about Evil Blizzard without being delightfully wrong.

Take for example, the lengthy opening track ‘Are You Evil?’ It has that classic metal tinge where everything played has a sinister feel. The riffs played aren’t the sort you would get from a band like Royal Blood or Foo Fighters. With that comes a straightforward chorus of the title being repeated but throughout there are whispered vocals and laughing that makes it interesting and almost comical.

Most of all though, this album is a lot of fun. It doesn’t take itself too seriously at any juncture. ‘Stupid People’ follows on the in the same vein with a brooding feel and a straightforward chorus. ‘Bow Down and Pray’ continues along the same dark path with some effect-laden guitars taking the track off on a tangent. That’s another thing this album loves doing, but it always know where to draw the line and never descends into the band just playing for themselves.

If there is a criticism to be made, it’s that the album lacks real variety. The song structure usually involves some discomforting lyrics, steady building drums, the song title repeated as the chorus and a meaty instrumental outro. Taken individually, each of the tracks on Everybody Come To Church stands up but as a collective they risk being tagged as formulaic. The album doesn’t stand up to too many repeated listens for this reason. Still, there’s enough detail in the tracks and it’s more than likely you won’t have heard anything like this in a while.

Later, ‘Balloon’ breaks convention a little with lyrics of "blow it up, let it go, in the sky, wave bye bye" replacing the album norm of repeating the title. There’s also a lovely creepy section in the middle where the volume and tempo really drop. It’s a beautiful moment, in a very Evil Blizzard sort of way, and something they should utilise a little more.

In a way, they do so on the extended intro of closing track ‘Watching’, which is comfortably the strongest on the album. If you were to advertise Evil Blizzard in any single song then this is comfortably the one that you would use. Lots of changes of pace, incoherent screaming, odd effects used to create atmosphere and a very old school take on a closing track.

Behind the mask of Evil Blizzard is something very interesting. On one hand, it’s an ultra-straightforward take on the metal genre that could almost be overlooked. On the other hand, the one that is waving and keeping my attention, are the details and quirks of the track along with the knowledge that Evil Blizzard are one of the most unique live bands around. It’s fun, bizarre and slightly derivative all rolled into one package and there aren’t many bands around in 2015 that could achieve that feat.