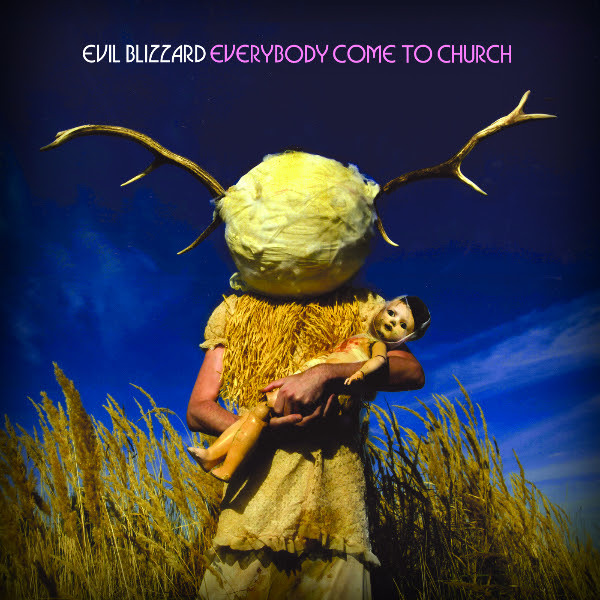 Evil Blizzard - Everybody Come to Church

It doesn’t take itself too seriously»

'Everybody Come To Church' is the new album from Evil Blizzard. To say it's been eagerly awaited in many quarters is an understatement, something we reckon fellow North-West based musician Mr Mark E. Smith, who's been heard to say of the Blizzard "I like Evil Blizzard, they give me hope that music is alive and kicking" will no doubt agree with. The Guardian are also huge fans of the band having featured them on their cover and describing them as"...afearsome collision of Hawkwind, krautrock, molten noise, dazzling psychedelic lights and weird, gnarly looking masks." The album was "recorded live in one day with minimal overdubs at Magnetic North Studios" "Everybody Come To Church is a fierce, spontaneous outburst of evil noise." Like we'd expect anything less. They had only four songs written before entering the studio and the rest of the album just 'happened' around ideas they'd had knocking about."Everybody Come To Church features eight tracks of brooding, sinister psychedelic rock that will melt your mind and soul. You have been warned" concludes the press release. Amen to that. And so to the first proper taster off the album. Evil Blizzard acolytes (of which there are many) will already be familiar with it as it first saw the light of day as a single released by our friends over at Rocket Records. The rest of you are in for a treat, so click play, sit back and prepare to enter the world of Evil Blizzard. Lp ltd to 500 copies on blue vinyl.description from www.roughtrade.com