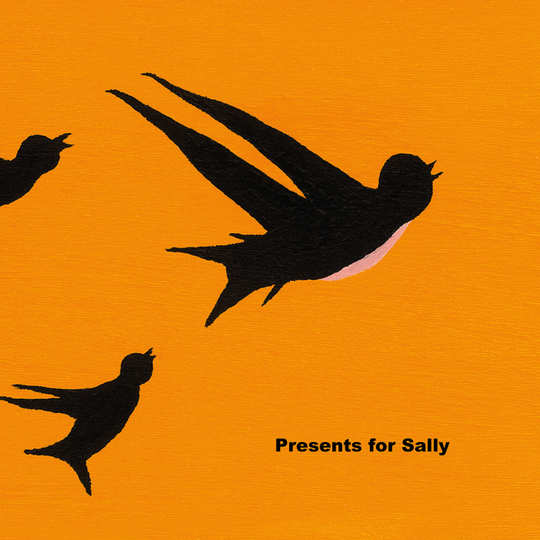 Presents for Sally may have only formed in 2009 but their music could quite easily have been crafted two decades earlier. Heavily influenced by Creation Records' halcyon period and the many bands spawned from that era, the trio - Matt Etherton, his wife Anna and Phil Russell - have been honing their sound over the past six years. Having released their debut single 'Catch Your Fall' in 2009 followed by inaugural long player A Touch Of Joy, A Touch Of Sadness a year later, they've spent the ensuing period building up to what could be considered a defining moment in their career. The two releases that followed, 2013's 'Anything Anymore' 45 and the Sing EP that preceded it hinted at a more experimental approach than their earlier recordings. Not that Presents for Sally could ever be considered revivalists. On the contrary in fact, as the long awaited second album Colours & Changes ably demonstrates.

Conceived over a three-year period, its 11 tracks take the listener on a journey that takes in a diverse range of sonic elements from all out sonic attack to acoustic laments about waking up in the morning. Ambitiously formulated and purposely executed, Colours & Changes sets out to achieve what it states on the tin. Opener 'We Fought Lucifer (And Won)' kickstarts the record in explosive fashion. Layers of distortion introduce the song before a cavalcade of drums crash in around the 90-second-mark. Matt Etherton's vocals ar deceptively low in the mix provide a haunting aftertaste while effects-heavy guitars swoon then erupt around him.

So it's to their credit that 'Wishawaytoday' takes the opposite path when it would have been easier to bludgeon the senses. Instead, Presents for Sally show their sensitive sides, preferring to take a more traditional poppier excursion that's drenched in melody rather than reverb. The vocal interchange between Matt and Anna Etherton on 'Anything Anymore' creates a tension similar to Kevin Shields and Bilinda Butcher's demure exchanges on 'Never Say Goodbye' from their often disregarded 'Strawberry Wine' 12-inch.

It's on 'The Sun Dehydrates' that the rulebook goes out the window. As layered guitars compete with discordant slabs of electronica, Colours & Changes reaches beyond the stars for another galaxy entirely. Not for the first time conveying two songs trying to escape from one another, it represents their boldest statement of intent to date and would probably be many artists' pinnacle were it not for the indigenous company perched alongside here.

Having often been compared to Ride , 'Sleep Tight' perhaps treads closest to what could be described as archetypal shoegaze, mainly due to the Ethertons admittedly flawless harmonies, it passes the test if not with the same tenacity as its predecessors here. However, 'Everything I Said' once again warrants epic status, pushing the boundaries beyond traditional dance/rock hybrids by way of its playful melody and insistent back beat that takes on a mechanistic urgency.

Both 'Sing' and the closing 'NSIC' find Presents for Sally at their most reflective. While the former's soothing tones pull the decibel count a little closer to earth, the latter's declaration of "Did you wait for the lights to go out?" set to a backdrop of acoustic guitar and church bells makes for a goosebump-inducing finale. In between, the title track rides along like a heavily accentuated steam train of noise and confusion while 'Floor Faller' could be Pale Saints covering McCarthy's 'Red Sleeping Beauty' in a parallel universe.

As with 'The Sun Dehydrates', 'Softly Spoken/Outside Honey' combines two songs into one, forging the record's most grandiose seven-and-a-half minutes in the process.

While Presents for Sally's eyes may have been focused towards their feet, their minds were clearly fixated on the stars. Colours & Changes: Boldly going beyond the realms of possibility.