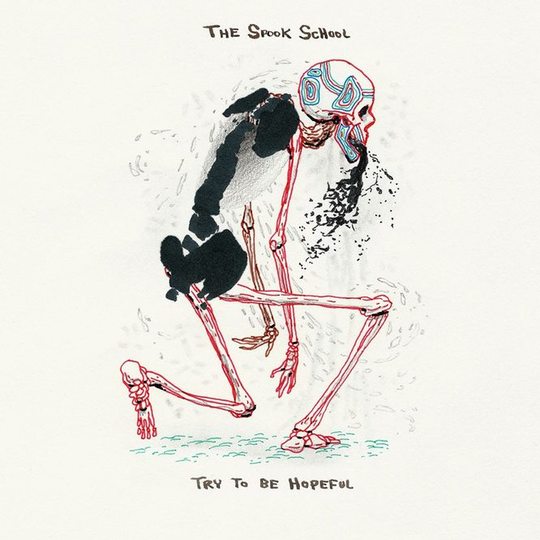 It was clear from The Spook School's debut LP Dress Up that the band were still very much in the process of figuring out who they were. Much of its material tackled the subject of coming to terms with yourself, particularly in the case of singer Nye Todd who was dealing with his trans identity. While the album and the live performances which accompanied it were raucous, occasionally rapturous affairs, to an outside observer it still felt like there was much in the way of doubt and unanswered questions in the minds of the four people who wrote the songs.

Two years on, the shy kids who made the first album appear to have grown into their own skin, because Try To Be Hopeful is an altogether more confident piece of work. If Dress Up was a band trying to work themselves out, Try To Be Hopeful is about clambering up to the highest rooftop in town with a megaphone and declaring their identity to the people below.

It was recorded while Nye was undergoing testosterone treatment, meaning his voice changes considerably over the course of the record. If you were to think that it was two different people singing the first lines of ‘Burn Masculinity’ and ‘Binary’, you probably wouldn’t be the first person to make that mistake. It would probably feel a bit strange in most cases for there to be such variance in the vocal of a band’s singer, but here it makes perfect sense and adds another layer to the theme of self-discovery.

The aforementioned two songs also happen to be Try To Be Hopeful’s best moments. ‘Burn Masculinity’ is a beautifully multi-layered song about alpha-maleness where Nye recognises the privilege associated with identifying as male at the same time as dishing out the most powerful ‘fuck you’ to the macho standards which come with it. ‘Binary’, meanwhile, is an exhilarating song which deals with the fluidity of gender, exhorting us to “Make them uncomfortable and challenge their ideals”.

‘Richard and Judy’ is probably the album’s most visceral song, and also the one which sounds most like anything off Dress Up. It sees Nye’s brother Adam Todd spitting venom about the culture of shoehorning young people into stereotypical gender roles: “Tell your son that when he’s older you’ll take him out chasing girls / He doesn’t understand but he’ll get there in the end”. Its pay-off of “I’m so sick of pretending that I am what you are” is hugely emotive, a clarion call on behalf of every kid at school who doesn’t feel like the rest of their classmates.

If they’ve developed emotionally, then as musicians it feels like there’s been major growth too, and you’d imagine that they’ve benefited from the ever-reliable presence of Hookworms’ MJ at the helm of production. The title track and finale of Try To Be Hopeful is a mid-paced torch song which feels somehow bigger than anything they’ve recorded before. While most of their songs before have been at breakneck pace (notwithstanding the occasional slowie), this one gradually swells into a massive singalong ode to remaining upbeat in the face of adversity.

‘Try To Be Hopeful’ encapsulates the rest of the record pretty neatly because in spite of its serious subject matter, its tone is almost unrelentingly positive. At the same time, though, the album is also completely balanced. The positivity is never over the top, nor does the pure sincerity exhibited throughout ever feel excessively earnest. It’s this which sets this band apart from their indie-pop contemporaries, and makes Try To Be Hopeful a record which should be revered as a truly important piece of work. It sounds like such a simple formula: write catchy pop songs about things which are important to you, but the fact is The Spook School have nailed it better than pretty much anyone in recent memory here.