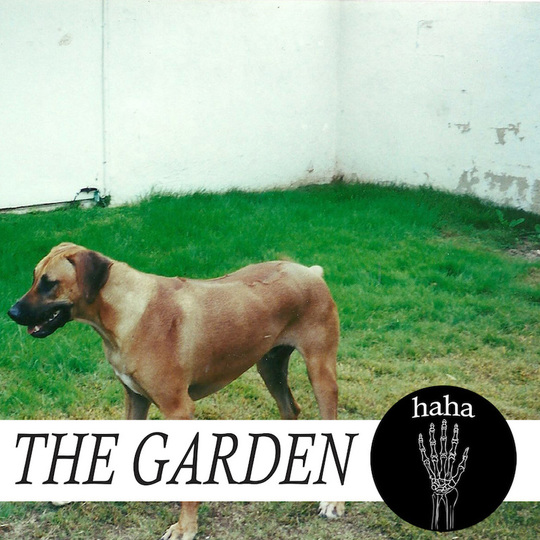 Sometimes when you get an album, you can work out the music by the cover. If it has bright lurid colours you know it might be out there and psych. If the cover has dark subject matter on it, and the band’s name is indecipherable, it’s probably metal and if the cover is ostentatious and glitzy it’s probably a pop album. When you are confronted with a dog standing on some grass, it’s harder to judge what’s is contained within. Given this is the cover to the new album Haha from Californian post-pop-punk-indie-disco twins The Garden, it’s even harder to gauge.

‘All Smiles Over Here :)’ opens with what sounds like a sample from the Forbidden Planet soundtrack, then a barrage of crisp drums and shouty vocals fills our ears, as a call and response verse takes over the song “Take your sunglasses off and put them back on again, I’ve created a force field and I hope no one breaks it, This is my life and this is how I choose to live it, Take control of your life, Stand up straight and shake your head” As punk mantras go, this is up there. ‘Jester’s Game’ sounds Alec Empire having a bash at pop music, and those shouty Dada mantras instead of lyrics “I’m on my knees, You’re my king and you’re my queen”. As the album progresses, as does the surreal lyrical imagery. ‘Everything Has a Face’ is a slow burner, but is it a reference to the Shears’ careers as models, or is it a subtle critique of modern society, or are they pointing out the obvious that everything has a face? It doesn’t matter as ‘Everything Has a Face’ is a sublime slab of post-modern pop.

‘This Cold Build Us a Home’ is a day-glo pick-n-mix of neo-punk with pop break beats with the prophetic and existentialism feeling chorus of “I gotta beat time, I’m running outta time” makes this a stand out moment in the Garden’s career so far. ‘Cloak’ sounds like Alec Empire prodigies Motormark. Everything is revved up to the nth degree, but with post-pop sheen. Title track ‘Haha’ opens with what sounds like a sample from Ratpack’s classic 'Searchin’ for My Rizla', then a filthy bassline kicks in and ‘HaHa’ goes from rave to punk in five seconds. The rest of ‘HaHa’ is filled with The Garden’s trademark surreal lyrics, incendiary composition and effervescence. ‘We Be Grinding’ is another meta workout. It sounds like the Ramones fronting a dance-a-size workout DVD, and this dance is, well, the grind. ‘Gift’ closes the album in fine form. Galloping beats back up psychobilly basslines while, instead on ending on a poignant slow jam, the Garden want to end like they start. Driving outta town with the top down and their foot all the way to the floor!

In just over 30 minutes the brothers Shears have managed to distil every facet of popular culture and spit it out in 120–180 second bursts. If you can think of it, it’s here! Punk joins hands with Doo-Wop. Funk hangs out with gabba. Disco has a drink with jazz while rock look on jealously and mutters under its breath. All the while vocals are delivered at the speed of machine gun fire. The lyrics themselves sound like slogans from Dada adverts shouted in front of ungainly punk pop beasts of tracks. What’s more it’s all so catchy and infectious. The levels of infectiousness make Ebola look like a bunged up nose. In all actuality it’s nothing of marvellous.