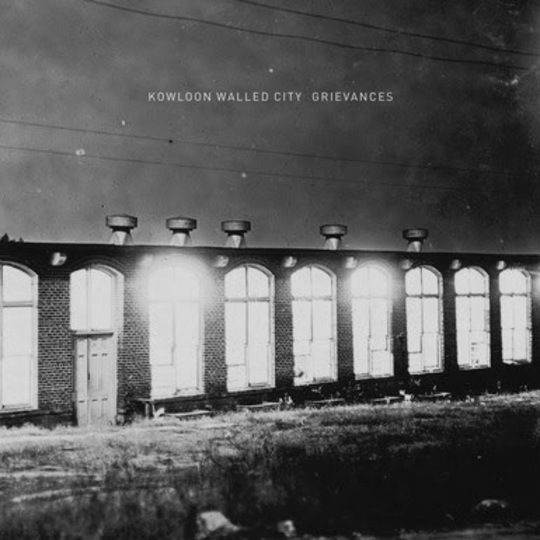 To spare you the Google search, Kowloon Walled City name themselves after a now-demolished Hong Kong metropolis which, during its time on Earth, was characterised by its debauchery. Upwards of 33,000 people lived in the 6.4-acre city, making it, shall we say, uncomfortable. To make matters worse—or perhaps more interesting—the city was notoriously a hotbed for crime, prostitution, and drug use. It was governmed by the Triads; it was dirty and uncomfortable. Before the Hong Kong government’s cleansing apparatus got to it, it was probably something like the id incarnate, in all its unblessed chaos.

So, one would have to assume that Kowloon Walled City (the band) is trying to achieve some stylistic similarity to the nature of the city. Which makes sense. Their new release, Grievances, is not precisely metal, but bears a number of metal’s identifying characteristics: cynical lyrics, sledge-like guitars, drums pounded like a dying man’s last pistol shot. What I know of metal leads me to believe that its writers prefer to write from the perspective of the id, or otherwise some kind of world behind the world, where illusion is fully dismantled, and all you see are the rough injustices wrought upon you by your governing bodies. The Walled City itself would be the antithesis: those harsh superego strictures being lifted, it would be the exemplification of anarchic society. So, cool concept. The only question is whether the music delivers on it.

The answer, my friend, is—well, sorta. Most stylistically notable about this seven-song collection is its pace. With the exception (barely) of 'The Grift' (my favourite song), the tracks trudge steadily along, at a pace that conjures the lope of zombies. That, by the way, is a choice that I’m prepared to accept as thematic: it’s no great stretch to imagine that a metal-infused band is employing a form that makes its listeners look at themselves as temporarily enlivened zombies. (Especially those ones letting the media control them, man. Those guys are zombies.) However, despite its being a potentially interesting thematic choice, it does little in the way of entertainment. The effect instead is of a slow-moving highway ride; definitely not standstill traffic, but a far cry from full speed.

Ladies and gentlemen, let me be clear: a slow pace is hardly the worst offence imaginable. There are moments on the album—most strongly on the title track—where the slow pace resonates, and I can imagine a roomful of moshing zombies, mourning their contract with life. But it more often sidelines my interest enough that I begin to be broadly unsympathetic. The drill sergeant vocals began to feel lazy. The chord patterns began to feel tired. Then 'The Grift' wakes me up a bit, then I go back to feeling how I feel. The bottom line problem with the record is that it does little to dazzle, and regardless of whether I’m feeling cynical or devoted, I always want to be dazzled.