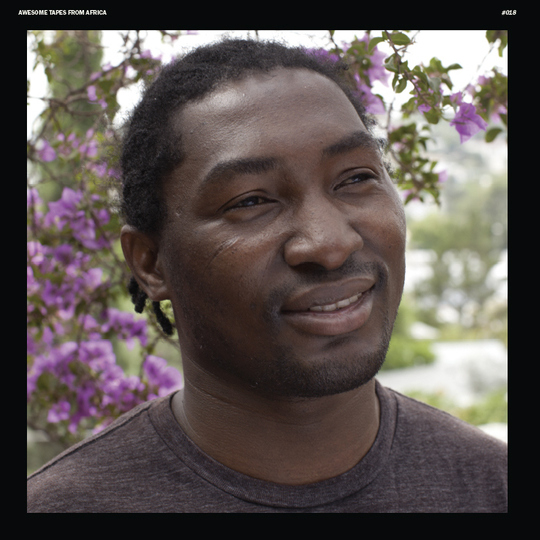 Released as the first 'new' recording on music blog turned record label Awesome Tapes from Africa, Songs of Paapieye, which marks the western recording debut of Ghanian artist SK Kakraba, is a record which necessitates, and rewards, deep investigation. Whereas in recent times artists such as Songhoy Blues and Mbongwana Star have found great favour and recognition with British audiences by combining African and Western styles together, to great effect, no such allowances to shorter musical attention spans have been made with this recording. Here, SK Kakraba is presented, authentic, live and without a single overdub, showcasing the music which he carried from the ghettos of central Accra, all the way to L.A.

SK Kakraba is master of the gyil, a Ghanaian xylophone made of 14 wooden slats strung across calabash gourd resonators. The buzzy rattle emitted with each note comes from the silk walls of spiders’ egg sacs stretched across holes in the gourds, called 'paapieye' in his Lobi language. The album focuses on a selection of SK’s favorite song cycles, funeral dirges, improvised interpretations on traditional songs and original compositions.

Where does one go with such an album? Without the experience or knowledge of other gyil players and their talents with which to compare it, (I will admit to knowing nothing of this genre, but was interested in broadening my own musical horizons) the only real place to go with this record is to comment on the emotional responses if causes as this series of six song cycles takes its course.

Opener 'Lubile Prai' is short and sweet. Its stop-start tempo shifts providing something of a sense of a build up of anticipation, which is more than satisfied as cascades of melody propel the track's latter third. The rallentando and diminuendo which sparks at the outset of 'Banyere Yo' gives Kakraba ample opportunity to show off his virtuosic skill and control of his instrument. As this frenetic but intricate opening section gives way, we are led into a highly rhythmic riff-based section which would not be out of place atop a four-to-the-floor dancefloor banger in an alternate universe. Each time the riff cycles, minute extra elements are added and taken away, before, once again, tempo shifts mark a change of mood. Before long, even without knowledge of the musical culture from which SK Kakraba springs, it is easy for the listener to be carried along on waves of appreciation for the sheer skill and joy of the playing on show.

'Darifu' continues the frenetic pace. In spite of this, there's something of a mournful tone and timbre which pervades throughout. By contrast, ' Darikpon Variations' canters in on the kind of riff that, melodically and harmonically at least, is not a million miles away from some of the straight-ahead grooves beloved of Jimmy Page and Led Zeppelin. Honestly, the first portion of this track could, with different instrumentation, be a solid-gold classic rock groove. As things develop, and the groove is built upon, before its variations come into play, the pulsing low end gives plenty of space for the higher melodic echelons of SK Kakraba's instrument to really shine. Next, 'Sopka' another shorter piece, gives more attention to the lower tones of the gyil, before closer 'Guun' allows Kakraba to showcase the instrument's full potential, flowing melodically and with all the tempo shifts we've come to expect, this is the record's highpoint, a true exposition of the talent and vitality on show here which leaves the listener exultant and yearning for more.

SK Kakraba won't, by any means, provide here an album for mass consumption, but, for the brave, or for the one who is much more a connoisseur, dig in. You might just come upon something special here.