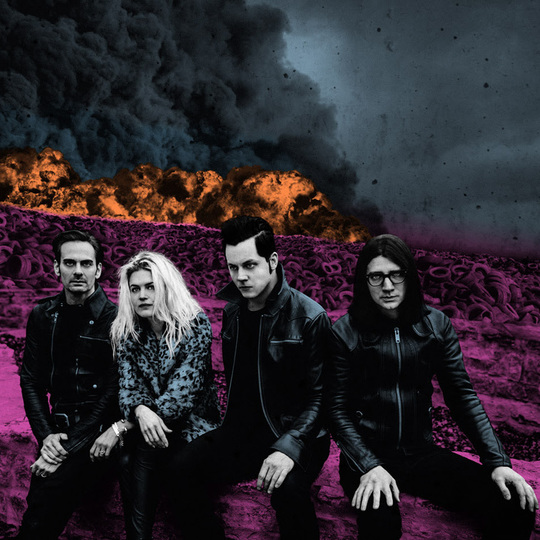 Despite his occasionally questionable outspoken nature, I’m mostly quite the fan of the works of Jack White. Obviously The Dead Weather isn’t all about the former White Stripes man, but stick with me for a minute here. Despite feeling generally positive when I hear his tunes, a couple of things have reminded me of his frailty recently. Firstly, the limp effort from Sam Smith for the new James Bond theme sent me back to Quantum of Solace when White and Alicia Keys showed less chemistry than Jesse Pinkman in the first series of Breaking Bad. Secondly, watching Royal Blood show shades of White’s finest work it was a stark headbang to the possibility that they would soon surpass his garage rock legacy.

Luckily, Dodge and Burn is the best Dead Weather record to date as well as standing up very well next to any of the work White has ever created. Where previous albums by the group have fallen a little short, here they hit all the correct dirty notes. Alison Mosshart has finally found her inner blueswoman to the point where you wonder if her vocals are more suited to this than White’s ever where. On the strength of her showing on this album, that’s definitely the case.

‘I Feel Love (Every Million Miles)’ opens proceedings with a riff that recalls Led Zeppelin and from there it’s an album full of hooks that can stand up next to any from the entire back catalogue of rock. While Mosshart shines and guitarist Dean Fertita and bassist Jack Lawrence also perform strongly, don’t take anything away from the drumming ability of White who somehow makes the most complex work seem raw and improvised.

From there, the album barely lets up. The tempo slows a little for ‘Buzzkill(er)’ which is a little bit of a slow-burner compared to some of the others on the album. It also shows off Mosshart at her best on this record. She croons: "Oh lord forget about me, I’ll be fine" and it feels like a statement in general as well as a part of the song. This Mosshart is powerful, more rock than indie, and here to make an impression.

‘Let Me Through’ stomps into the mix as one of the most White Stripes-like tracks present. It heavily recalls ‘Blue Orchid’ and that entire phase of White Stripes in general. It feels full and heavy while also being stripped back and basic. Again, Mosshart is what makes this track what it is, stopping it from slipping into a parody of earlier work. Instead, it draws heavily on old tricks but still feels fresh and crucial.

Jack the rapper makes an appearance on ‘Three Dollar Hat’ and it’s bizarre. It’s really up to you to decide whether this is a brilliantly quirky interlude to the record or ill-advised. When the track does begin properly with triplets of power chords, normality is resumed.

‘Lose the Right’ and ‘Rough Detective’ (the latter seeing more White vocal action) are both strutting blues tracks in the vein you’ll be enitrely used to. It’s a sign of how strong the performance of Mosshart is that I find myself begging for more from her and less from White.

‘Open Up’ again goes after Led Zep territory with the opening primal screams from Mosshart rivalling anything Robert Plant ever did. ‘Be Still’ takes things down a more interesting path. Subtle bass and drums reign for the first time on the album and the chemistry between Mosshart and White is also at its best. Often they seem like they’re miles away singing but here it feels like they’re singing in each other’s face and telling the other to "Be Still".

‘Mile Markers’ and ‘Cop and Go’ are more of the same bluesy rock tracks but with the emergence of Mosshart really carrying them to new heights. ‘Too Bad’ actually recalls that ‘Another Way To Die’ track for Quantum of Solace for a few seconds before going off on a wild blues tangent.

Closer ‘Impossible Winner’ though throws a real curveball with a Bond-like ballad complete with strings. It’s a darker track than most lent to the franchise but outshines any of the tracks from recent years by drawing on that formula but also changing it dramatically. Maybe Mosshart should be given a call when Spectre gets a follow-up?

In any event, on Dodge and Burn, Mosshart really makes the album her own and consigns White to the shadows. As for The Dead Weather being a side-project? This has more potential than any of White’s solo work and should be given everyone’s full attention.