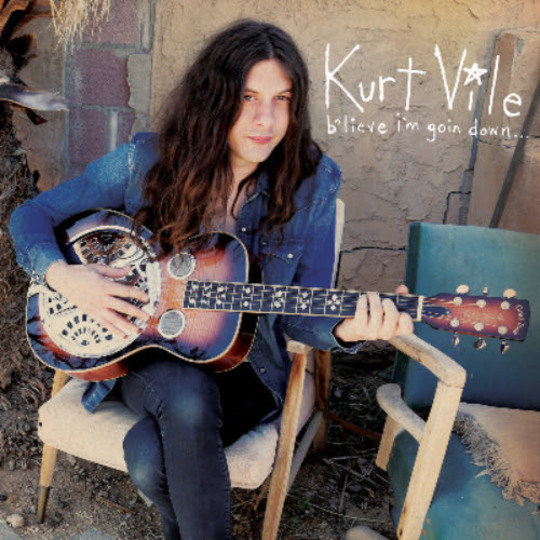 The title of Kurt Vile’s sixth solo LP, b’lieve i’m goin down…, is spelt and punctuated exactly as you see it here. It’s a familiar phrase, well-worn in various forms by folkies from here to Leadbelly. It’s far from the only such phrase used on the album: Vile also claims outlaw status, then later utters manifold “I’m a-gonna” sweet nothings directly into his baby’s ear. Basically, this type of language helps build the aesthetic of his project: the candid-seeming, unassuming kid just skimming his mind for whatever happens to be at the top. More deeply, it grounds his effort in a tradition that functions on unknowability and mystery, that prizes subtlety, and that prides itself on being accessible to any human heart in need.

The title b’lieve i’m goin down… is apt for a record that's best described as quietly provocative. The most obvious distinguishing feature of the album (and of Kurt Vile’s music in general) is its carefully constructed ambivalence. Vile’s voice is never constrained to any structural rules, nor, sometimes, to a discernible idea or even melody. On the surface, this seems unconsidered and oversimple. But it’s not—it’s intentionally simple, the same way Woody Guthrie affected a down-home, simple-as-the-hills persona, when he was as intellectual as any. You can find it anywhere on the album, but I think a great example is 'Dust Bunnies', where he pronounces the first lines of each stanza with a Dylan-type upward inflection. It adds levity (and somehow vulnerability) to a song concerned with the humbling lessons of maturity. The song also drops Sam Cooke and Band references, developing those roots he clearly wants to engage with.

As I say, the lyrics don’t always have a clear thematic centre; many read like they were pulled straight from Vile’s melancholic subconscious. These, I’d say, are the weaker examples. If, at its best, his candidness comes across as authenticity, at worst, it’s flat. “Life Like This,” which is a musically strong track, achieves little extra in its lyrics. It sounds suspiciously like he wanted to say something more than he really had something to say. 'I’m an Outlaw' suffers from a similar condition. I’d stop well short of calling either track bad, but the album is much more interesting in many other places.

When his lyrics do have a focus, a consistently discernible theme is the process of maturing. 'That’s Life, Tho (Almost Hate to Say)' cites laws of physics in resigning to the unanswerability of life’s big fat questions. 'Pretty Pimpin’' is a black comedy about losing track of who you are as your physical features begin to betray your expectations. 'Stand Inside'—which, by the way, is the album’s most poignant track—is straight-up sexy, but isn’t just about sex. To me, it sounds like a sexual impulse borne of wanting to be a father, rather than just wanting to fuck.

I’d also argue that the sheer length of the songs (most often quite long) suggests maturity. Long songs are hardly a new trick for him; many of Wakin on a Pretty Daze’s tracks exceeded six minutes, and several exceeded eight. But here, the lengths waver much less, and it sounds more self-aware, like Vile better knows the power it can hold, and how to use it sparingly.

Like the tradition that he draws from and cites, b’lieve i’m goin down… is rich with continuity from its predecessors. That includes previous artists—some long dead and some just passé—as well as his own previous work. He makes no huge stylistic leap on the album, but instead allows for an organic refinement of his already unique and provocative style. It’s well aware of its influences, and well aware of itself. Perhaps it doesn’t thrill the same way his younger records thrilled with their wiliness and exuberance; but perhaps it was disillusioned by that type of thrill, and elected for something a little more reliable.