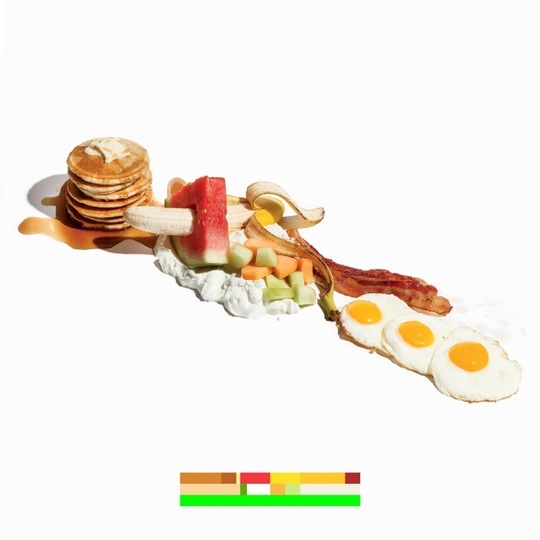 The album artwork for Battles’ third album, La Di Da Di is proving a bit distracting right now. In case you can’t see the picture above, it’s a big pile of breakfast food. You’ve got a stack of pancakes up the top and some fried eggs down the bottom. But then right there in the middle you have a banana, prodded suggestively through the soft flesh of a watermelon slice, right next to some well-done rashers of bacon. Because you know, pork and fucking and David Cameron. Look, if you’re reading this any time more than a week after the story broke it probably won’t make any sense, but for now all anyone cares about is HA HA PORK AND FUCKING AND DAVID CAMERON WHO PUT HIS COCK IN A DEAD PIG. What do you mean, there’s music on this thing as well?

The tenuous link between the album art and the allegations that broke in its release date (yes I’m way over deadline, sorry eds) are an unfortunate coincidence for the New York – so New York – trio. La Di Da Di is a fully ‘instrumental’ album and, in the impatience of 2015, it is always going to be difficult to present a 49-minute record sans vocals as something other than background music. Battles are not a band who make music for the BBC Radio 3 crowd: they make music for those of us who ain’t nothin’ but tired. For the hard work and smart thinking they have clearly devoted to this album to get the recognition it deserves, it needs to distract us. This is no mean feat without the soulful, pop grooves that Tyondai Braxton’s vocals brought to their enormously acclaimed debut, Mirrored.

By and large, La Di Da Di, its annoying title aside, is a success. It’s built in from the same mould as its predecessor, Gloss Drop: stripped back and eschewing the at times absurd complexity of their debut in favour of a more straightforward, melodic sound. Its components are more straightforward, with keyboards, drums, bass and the odd guitar are being looped about with gleeful abandon but still sounding more minimalist than either of its predecessors.

The album is at its best when it gives prominence to the rhythm section. John Stainer – never mind your Kotches, Devendorfs or Chases; the man behind the Battles kit is surely the most underrated indie rock drummer around at the moment – dovetails with Dave Konopka’s punchy, punkish basslines to make the likes of ‘Non-Violence’, ‘Dot Net’ and ‘Summer Simmer’, er, simmer and grab your attention. They don’t quite force you to dance á la ‘Stayin’ Alive’, but they’re pretty damn persuasive.

There are odd moments that drag a touch – the middle four minutes of ‘The Yabba’ don’t live up to the excitement of the two that bookmark it, FF Bada feels like it’s trying to inject urgency in a by-the-numbers fashion and ‘Tyne Wear’ is a needless, sub-two-minute interlude. Nevertheless, on La Di Da Di Battles feel like they are, slowly, finding their way in the right direction.