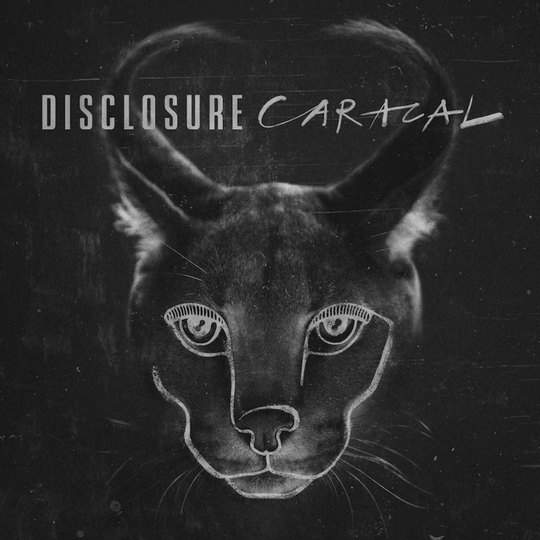 Poke around Disclosure’s Soundcloud page, and you’ll see the same chalky jaw outline stamped on each guest singer. They’ll tell you it’s part of their brand (well, they’ll use the word 'aesthetic', but we know better). But that outline symbolizes their true objective, i.e. to patent a lukewarm dance pop boilerplate that the duo can impose onto any singer of their choice whilst still retaining ownership of their product. Caracal is the manifestation of that plan – and it’ll be a huge boon to the Lawrence brothers’ enterprise, indeed, but listeners are left with a streamlined collection of tracks that don’t connect on any theme, or indeed with any facet of your feeble humdrum single life (for, the popular media tells us, to be single is to be humdrum).

I’m reminded of the Bauhaus – no, not the band, the art school founded in Weimar, Germany that invented the concept of mass production for home furnishings (and eventually architecture). You want a lamp with a glass base? Sure! Just take the first model with a steel base, tweak it, and then reproduce that sucker ad nauseum. Sounds like common sense today, but not in the days when everyone crafted furniture piece by piece, with intricate curlicues and claw feet.

Anyway, beats are Disclosure’s lamps, and with a few tweaks they slip on like sexy designer clothes for each singer that steps up to the catwalk. More often than not, the result sounds less like the designer, and more like the models – cos yup, The Weeknd gets the flashy, airbrushed Michael Jackson treatment ('Nocturnal'); and there goes Kwabs, crooning over some readymade, wobbly electro-soul ('Willing and Able'); and there goes Miguel, sighing and strutting about to a slice of tepid EDM ('Good Intentions'). Oftentimes, these static templates resemble each other so much that you feel as if you could just swap vocalists between songs and not lose any of the original flavor – like, couldn’t Jordan Rakai have nailed the upbeat pop drama 'Omen' instead of Sam Smith? For that matter, couldn’t Kwabs have steered the perky R&B dub ballad of 'Masterpiece' rather than Rakai? And really, did anyone need Sam Smith at all?

On this slick synthetic stage, the lines of ownership blur. 'Magnets' sways with a tourist trap beach at sunset mystique that pokes out over the dubby house lot – but do we credit Disclosure for the soft pattering drums, or Lorde for her smoky sensual delivery, or Disclosure again for molding this to her outsider-on-the-inside image? “Pretty girls don’t know the things I know” - I’m assuming that the Lawrence bros penned this line just for their contrary guest, something to match 'Royals' and its contrary stance against high brow society. But who’s the adversary now?

Ah, look no further than the Lawrence bros’ own contributions. In the metro-smooth techno glide of 'Echoes', Howard Lawrence basically asks his girlfriend to shut up for five minutes, because she talks so much that she forgets the promises she makes. And then there’s 'Jaded', a rather ballsy pop number where Howard tells a “faded” old timer that he don’t know shit, cos “now your time has passed you by…you’ve already made it / there’s no need to change it”. Fascinating, eh, how white male entitlement manifests itself.

Soooooo yeah - kinda hard to excuse the rampant misogyny and ageism, but some tracks still shine from the otherwise monochrome mob. Good god, Gregory Porter, for instance - this guy radiates a warm, Stax soul vibe that cleanses the ears of everyone else’s selfish showboating on 'Holding On'. Elsewhere, Nao totally owns the starburst pop tune 'Superego', and god damnit, Howard’s own 'Molecule' drips with just enough bleached funk to keep yr toes a-tappin’. Also, Disclosure let go just enough of the bobbing rave 'Bang That' to simulate some kind of dancefloor frenzy, albeit a rather tame one.

To conclude - the Lawrence bros do pull some new tricks on Caracal. But the album marks the end of Disclosure as a band, and the beginning of Disclosure as a hit-dispensing enterprise that manufactures durable, no-stain, easy-to-clean products to please every audience. Personas become flavors, an illusion of diversity under one white chalk mask.