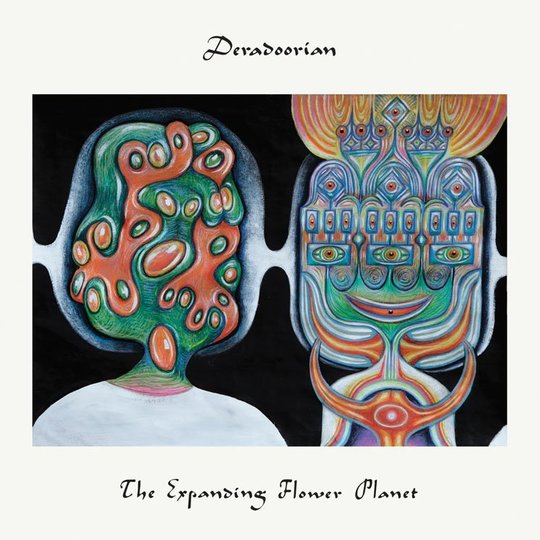 Although Angel Deradoorian is certainly best known as bassist for Dirty Projectors, it is her voice which is her most powerful and distinctive characteristic. Indeed, one of the most recognisable aspects of Bitte Orca-period Dirty Projectors was Deradoorian’s versatile and bird-like trill soaring with ease. Since then she has worked with Flying Lotus and Charli XCX among other headline names. But what happens when you take that characteristic and amplify it throughout the length of an album, rather than it simply adorning the work of others? As her debut album The Expanding Flower Planet shows: the results are mixed at best. Whilst it works as a decent showcase of her well-known talents, it does not manage to emphasise her skills as a songwriter.


Deradoorian - "A Beautiful Woman" Live from anticon. on Vimeo.

There is plenty which is sonically and compositionally interesting here in terms of textures – though often these are overwhelmingly dense – melodies and instrumentation, but when these elements are combined they end up a little indistinct, predictable or tiring. It feels like she is striving too hard to achieve the unachievable. The basic organ-based backing of ‘Violet Minded’ is blown away and overpowered by a stack of melodies and harmonies on top of one another whilst ‘Your Creator’ is ponderous in the extreme. The one time that the whole ethereal cosmic-space-jam thing succeeds is ‘The Invisible Man’. In this, Deradoorian’s voice is more submerged and lower on the register altogether, whilst motorik-style beat, bass chords, distant guitar and organ sounds flit in and out of the foreground, even allowing time for a prolonged instrumental passage. At times it is even minimal, which is welcome. And it works.

The biggest problem with The Expanding Flower Planet is the lack of variation, predominantly in terms of pace. Between the opening track, ‘A Beautiful Woman’ and track nine ‘The Eye’ there is very little which even approaches up-tempo. The number of layers is not proportional to quality. Why the most exciting and upbeat track – ‘The Eye’ – in an album distinctly lacking in excitement is buried down at number nine of ten is baffling. That is not to say that the slower and less intense passages are complete duds in isolation, but multi-tracking vocals to the nth degree becomes tired quite quickly. The understated – and ultimately frustrating – closing track ‘Grow’ is another which has at least something about it. It begins as a fairly standard yet haunting singer/songwriter track before it changes and arguably loses its direction amid a sea of pipes and bass guitar.

Whilst Deradoorian’s ambitions were undoubtedly high in creating The Expanding Flower Planet, the end result is more miss than hit, leaning too heavily and too often on dense harmonies at a slow pace which ends in a record lacking cohesion and direction.