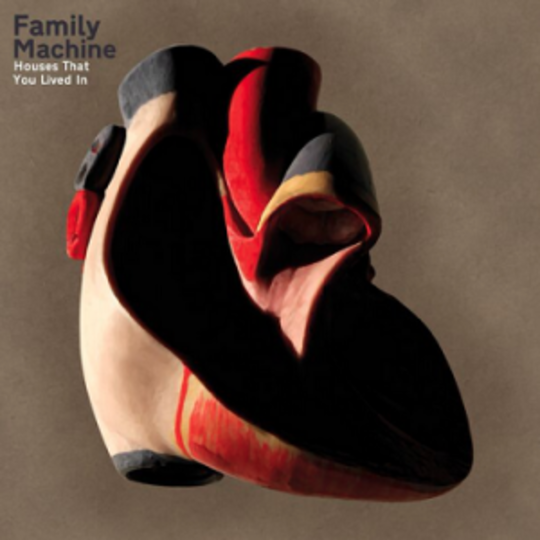 Way back in 2008 was the last time Family Machine released a full-length album. They called it You are the Family Machine, which maybe implicated the listener in some kind of co-creative feedback loop, but was actually just a somewhat sprawling collection of charming pop songs. Apparently the years in between have seen them performing and writing and writing and performing, joining the rosters of a number of small festivals, filming a video for Houses that You Lived In’s lead single 'The Less You Know', and even scoring the soundtrack of an upcoming Star Wars documentary, Elstree 1976. Seven years is quite a hiatus from releasing recorded music, but it all ends now. They’ve got a new one out, so register their second listener-implicating album title, and their second more-or-less-charming collection.

And folks, it’s a brief indie/pop record that lives up to its classifications. The most prominent instrument throughout is the acoustic guitar, beyond which the instrumentation stays basically within its preset parameters—i.e.: guitars, bass, drums, and ultimately a banjo for good folky measure. However, close listening also yields you some synths and xylophones, and moderately diversified percussion too. The overall texture is something you’ve heard before: it’s that pop-folk sound 'pioneered' by groups like Mumford & Sons/Avett Brothers and latched onto by countless others, plus the occasional synth to stir the pot a stroke or two.

The second time through is when you'll start to sing along, which speaks to many of the songs’ pleasant catchiness, and also their non-complexity. The record begins with the uplifting 'Friends with the Wolves' picks up speed with the Revolver-esque 'Long Way from Home', then confounds somewhat with 'Quiet as a Mouse', a track stripped of intimacy via overproduction. “Morning Song” conveys a sweet ember glow that gets stamped out by 'We Ain’t Going Home', a 1:40 refrain-only, which, distilled to only the most essential pop elements, registers more as anticlimax than poignant pop crystal.

By record’s midpoint, the strengths and weaknesses are fairly clear. It’s easy to find yourself at home in the refrains and the comfortable production. It’s less easy to feel truly challenged. When Houses That You Lived In isn’t pleasant and fun, it’s merely generic. It doesn’t stretch far beyond the borders of convention, which means that it often feels unambitious, or at least uninventive.

The second half is more subdued in tone. 'Sleep' does as little for me as 'We Ain’t Going Home', but the final three work as a fairly effective conclusion. 'The Less You Know' might lead you to consider some of your own mistakes, and 'Skeletons & That' could well remind you of the mysteries hidden in the walls of childhood. Looking back over the record, with the rooms-of-youth-oriented final tracks in mind, you get a sense of the record’s focus on home, and the way that homes build people, people who then go on to build homes with/for other people. The feel often approaches poignancy and falls just short, its messages delivered within comfort and without vigor. I pray for an edgier, more challenging record, and I hope it’s not another seven years before Family Machine tries again.