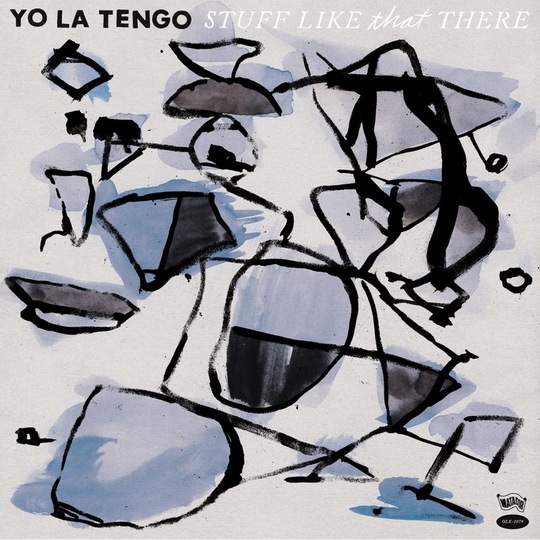 Today is one of those days. I’m working from home, have no plans before a series of late shifts in the office over the entire weekend and I am bored. I slept in until about nine this morning, have watched one episode of The Wire and now, at a minute past three in the afternoon, am still desperately chugging coffee to try and get myself going. Even the cricket is a bit dull right now and I bloody love cricket. I was meant to be heading to Green Man today but have to do real work – I reiterate – all god damn weekend instead.

Stuff Like That There is not an album for today.

The idea is the same as that behind 1990’s Fakebook, an album of covers, reworkings of old Yo La Tengo songs and a smattering of new ones. Just like Fakebook, they are reunited with original guitarist Dave Schramm (what a lovely name to say aloud that is) and, just like Fakebook the sound is a shift towards alt-country and Americana.

Now there’s nothing inherently wrong with that. Each and every song here is (re)constructed in a lovely way. Heartfelt melancholy seeps through every track and there is plenty of excellent musicianship to admire, most notably from Ira Kaplan on acoustic guitar and Georgia Hubley with some neat minimalist percussion from her small kit. Plus, as strong albums this year from Wilco, Low, Reichenbach Falls and Sturgill Simpson have proved, there is a hell of a lot of mileage in modern alt-country and Americana.

But the thing is that every song is filtered through the exact same alt-country and Americana lens, Yo La Tengo style. When Hank Williams’ classic ‘I’m So Lonesome I Could Cry’, The Cure’s ‘Friday I’m in Love’ (admittedly this is easily the best track on here) and ‘Deeper into Movies’, a brilliantly scuzzy, lo-fi track on I Can Hear the Heart Beating as One, all sound pretty identikit then you know you’re unlikely to have the most engaging of albums on your hands. They’re by no means bad, but the result is a collection of seven-or-eight-out-of-10 songs making a five-or-six-out-of-10 album (skip to the end to find out which!).

Credit has to go to the band for, as ever, exploring such a vast breadth of musical influences when it comes to musicians to cover. As well as Williams and The Cure, you have Darlene McRea, The Lovin’ Spoonful and The Cosmic Rays/Sun Ra. There are also obscure bands I’ll admit to not being familiar with: Special Parliament, The Pillow Special Pillow, The Parliament... that typo was genuine and is left in to give you a sense of just how much Yo La Tengo clearly love their music. If you have records by all these artists on your shelf then you probably have a pretty good music collection, but that’s because it’s so eclectic; here, together, it sounds like Low on Tramadol. It’s only thanks to the press release that I can tell which songs are originals and which are covers of something I’ve never heard of.

Stuff Like That There is a season of Mad Men in musical form. It’s dreamy, pretty and has a soft-focus feel. Its individual components are easy to admire. People in their twenties who live in zone two and use words and phrases such as 'millennial' and 'Can I get some of the quinoa and fennel quiche, please?' will pretend that it’s brilliant and that they get and love it. But the truth is that, for possibly the first time in Yo La Tengo’s discography, they're a bit boring.