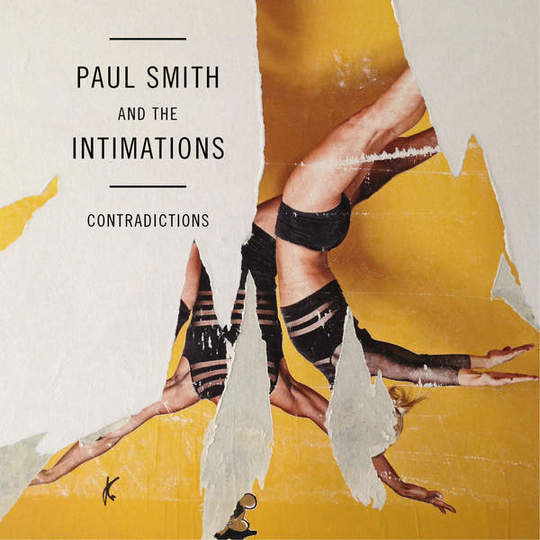 Paul Smith will be most recognisable to casual observers of UK indie-rock as the sharp-suited, scissor-kicking whirlwind of a frontman for Maximo Park. Beneath that furiously energetic stage persona, though, there’s also this bookish, introspective side to him, which has always informed the band’s songs. Smith has spent several patches of downtime from the band in slowly constructing an alternate discography to his work with his band, firstly with his solo album Margins five years ago, and then with Frozen By Sight, an unassumingly spectacular collaboration with Field Music’s Peter Brewis last year.

His latest bout of moonlighting apparently represents something of a full band project, with The Intimations consisting of a group of musicians who toured with Smith on Margins, plus a rolling cast of guests. Contradictions is a departure from the starkness of his debut, because it’s a beautifully breezy collection of songs. Of course, we’re dealing with the frontman of a band whose pop nous has enabled them to outlast many of their contemporaries, so it would seem odd to be surprised by him releasing a catchy set of songs. However, Contradictions is catchy in a completely different way to Maximo Park. There’s a lightness of touch to so much of it that makes it a bit of a curio - an album which is at once quite sparsely assembled but also rich in hooks. The only song which could sit particularly comfortably on a Maximo record is ‘Before the Perspiration Falls’, and as such, good as it is, it’s the proverbial sore thumb here. More representative are the faintly Marr-like riffs which propel ‘I Should Never Know’ or Contradictions’ strongest moment, the quietly powerful ‘Reintroducing the Red Kite’.

Essentially, Contradictions occupies the middle ground between the barely-there nature of the songs on his first album and the full-on pop onslaught of Maximo Park. Smith’s vocal delivery is in keeping with this, a wistful croon which represents a step up from the speak-sing confessionals of Margins, but which is still somewhat pared-down from the 100mph assault he’s most known for. It shows a versatility we could never have reasonably expected from him around the time of ‘Apply Some Pressure’, and highlights the fact that Paul Smith is an artist who many seem to underestimate. His songs have always been like a personalised map of his world, rooted in a nostalgia for places as much as people. It’s something which is as apparent as ever on Contradictions, with locales as diffuse as Coney Island, Jesmond Vale and Berlin referenced.

Sure, there’s the odd couplet here which feels just a little clunky, such as "And the weight of your gaze / Makes my temperature raise" on ‘Fill in the Blanks’. Rather than puncture the mood which Smith and co have so skilfully created, though, it could actually be said to go some way to enhance the appeal of Contradictions. It’s an emotional record, and the odd slightly clumsy expression of sentiment actually just emphasises the point. It’s similar when he takes on the acoustic fragment ‘The Golden Glint’. At one point it seems like he’s tempted to try and channel the gut-wrenching rawness of Richard Dawson, but thinks better of it and just tails off. It demonstrates more clearly than ever that Paul Smith is incapable of being anyone but himself, and Contradictions is an artefact which is testament to that. If you don’t already like him, then this may well leave you cold. If you do, though, then you might find this makes you like him a hell of a lot more.