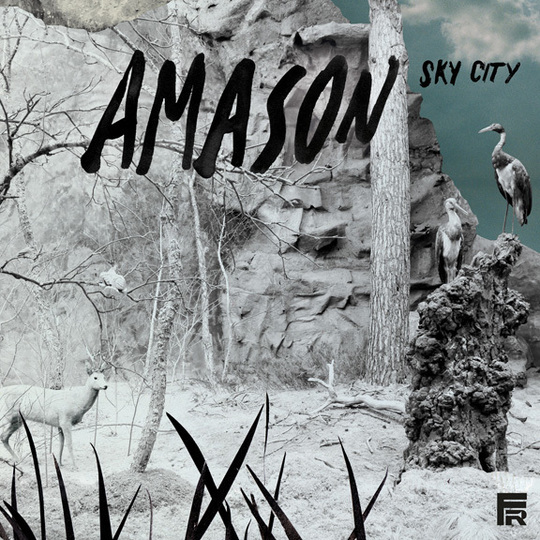 So here’s a question that, if you’re wide awake, you’ll comfortably be able to answer: what do you get when you combine members of Dungen, Mike Snow, Little Majorette and Hajen? Why, you get Swedish supergroup (of sorts) Amason. Their debut album Sky City has a depth and resonance far beyond the normal scope of a collective setting aside their normal roles to form a new concern.

This is hyper-intelligent pop music. It is both stylistically diverse, yet at its core has a beating heart which is identifiably Amason. Right from the word go, with the percussive introductory groove of ‘Algen’, which manages to simultaneously conjure images of School of Seven Bells, Phoenix and, showing that my ears are processing oddly at the moment, The Boxer Rebellion, Sky City delivers the brave listener a pop-listening masterclass. In the course of even that first song, an almost chanted verse is replaced by a synth and piano instrumental section, before an urgent pizzicato string part delivers us back to the chorus. Before the song’s end, a brass fanfare become the dominant figure. This is a band who are having fun.

On the disco shuffle of ‘Duvan’, Amanda Bergman’s vocals take centre stage. She has a smooth and light vocal tone, a versatility which allows Amason’s obvious penchant for shifting melodic patterns to really take flight. Recent single ‘Kelly’ continues the theme. A perfect summer pop song, with a light touch synth lead (sounds like harpsichord and flute, but I’m probably way out) which gives way to 2015’s best pop saxophone solo. This is the kind of song that is precision-engineered to put a smile on your face. It might not achieve world peace, or change the world, but as a slice of modern pop it is wondrous.

‘Elefanten’ slows the pace. A reverb-drenched piano, and earnestly-delivered vocals in the band’s native tongue show another string to Amason’s bow. Layered guitars take the lead for the first time on the album as the song winds to a mournful climax.

“Went to war for a lovable feeling” Bergman declaims on ‘Went to War’, as she returns to the fore. The points on this album where she is given centre stage truly are its highpoints. Not to say those with whom she shares lead vocal duties offer less, more that she has a standout voice. Certainly, her performances here render discovering her other musical guises an absolute necessity.

In the latter stages, things slow down a little. ‘The Moon As a Kite’ is carried along on a pretty piano figure as Bergman again excels. One of several points where the mind is drawn to the best bits of the canon of Nicole Atkins, this is a late-album highlight. ‘Clay Birds’ is a perfect closer. As the curtain is brought down on the record, a driving organ solo swirls and whirls, leaving this listener, at least, baying for more.

In spite of its 12 track length, Sky City seems to slip by in a flash. More than worthy of deep and considered listening, it would be an awful shame if it did not receive consideration. If you like your pop music intelligent, layered and tinged with drama, this is an album you can’t afford to ignore.