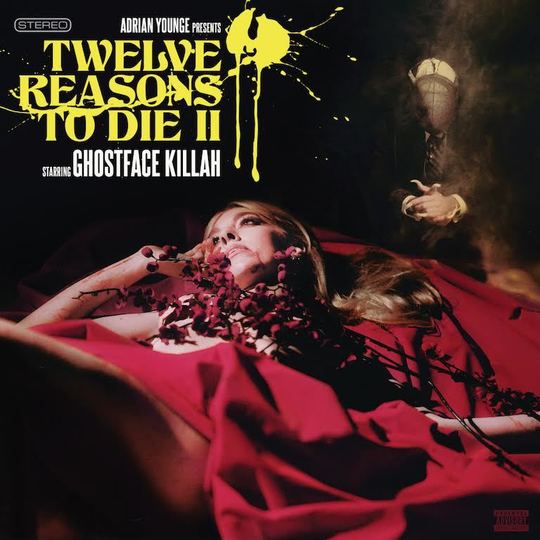 Adrian Younge and Ghostface Killah’s Twelve Reasons To Die series plays out as a parallel universe steeped in violence and mob sensibilities. An exaggerated gangster fiction, depicting a blood strewn world which takes as much influence from the twists and turns of familiar Mafioso plot lines as it does from the stylised violence of far eastern martial arts flicks. The two complement each other incredibly well and is something that Wu-Tang have been making a career out of for the past 20 years. Continuing from 2012’s origin story, Twelve Reasons To Die II cultivates the drama and utilises all of Ghost’s lavish narrative ability in what is a dense and detailed exploration of his favourite theme: violence.

For those unfamiliar with the first of the two concept albums, the story is based around Ghostface’s long-standing alter ego Tony Starks, transposed to Sixties Italy as the ruthless enforcer of the Deluca crime family. Starks abandons the Delucas to go freelance and inadvertently falls in love with the boss’s daughter which, as you can imagine, isn’t the best idea for self-preservation. He is murdered for his treason and Stark’s remains are pressed into 12 records which, when played, resurrect Ghostface Killah; an embodiment of Stark’s inherent violence and thirst for vengeance.

If it sounds like something taken from the pages of Marvel, it's intended to be. Ghostface has been mildly obsessed by the comic book medium throughout his career and his penchant for detailed storytelling lends itself well to this stylised framework. His first attempt in this particular narrative, however, did leave something to be desired. It felt cramped and perhaps unrefined, hopping through well thought out scenes without enough consideration on how to get from one to the other. This left it feeling somewhat incomplete, but the second instalment picks the story up in a much more satisfying way.

The reason that this sequel succeeds so emphatically is its tightening of ideas. The plot is made more digestible by the occasional interlude where RZA tracks back to make sure that we know what is going on. As well as consolidating the dense rapping which is easy to get lost in, this feature punctuates the record with some eloquently crafted monologues from an omnipresent narrator who adds tension and horror. It comes with some impressive feature verses from Chino XL, Scarub, Vince Staples and most pertinently, a co-starring role from Ghost’s age-old partner Raekwon. Raekwon really is the key to the record. He plays the role of Lester Kane, the head of New York’s crime underworld where the story now takes place (circa 1970). This adds a whole new dimension to that of the first instalment and another incredibly diverse and colourful storyteller. Adrian Younge’s production is also more expansive, cinematic and cohesive and all comes together to create something that feels more big-budget and considered.

Although Ghost stars once again in the second instalment, he works in tandem with Raekwon’s Lester, who is illustrated in ‘King Of New York’ and whose family have been killed by the Delucas. Searching for revenge, Kane comes across the occult records which house the remains of Ghostface and summons him in ‘Let The Record Spin’. Ghost agrees to help him wreak his revenge, but only if after the deed is done, Kane kills himself to allow Ghost to possess his body. This is described in ‘Ressurection Morning’, but in a twist of fate and after Kane has killed himself, Ghostface decides to instead possess the body of his illegitimate son who has been covered up by the Delucas in ‘Life’s A Rebirth’.

The plot is complicated and would take innumerable listens to get the complete story without the aid of RZA’s interludes, but the storytelling is vivid and full of colour. Highlights come in the form of ‘Rise Up’ and ‘Blackout’, the latter imagining the violent and ruthless way in which Lester Kane and the spirit of Ghostface will destroy the Delucas. The whole album is well-thought through, full of imagination and tightly executed. It offers a natural and focused progression from its predecessor and is another one of the definitive records of Ghostface Killah’s later career, along with the BADBADNOTGOD collab Sour Soul and, in all probability, the forthcoming DOOMStarks.