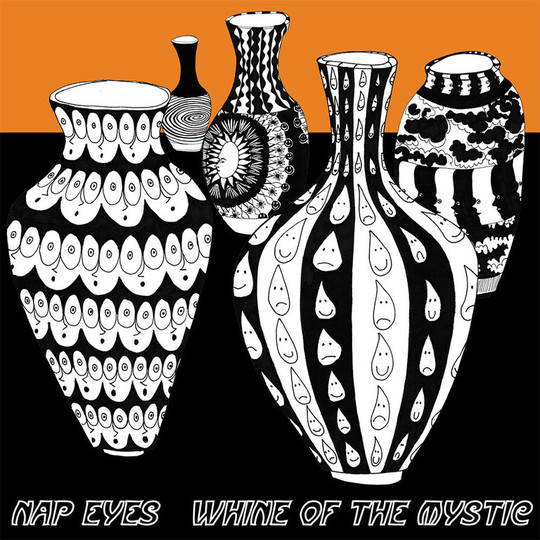 The first thing Nap Eyes deserve credit for is the aesthetic coherency. I’m thinking about the cover art, the production, and the lyrical content. I like the ironic interplay between the phrase Whine of the Mystic and the computer-rendered vases with little mixed-emotion smiley faces on them. I like how 'whine' isn’t the type of romantic/bucolic word you might think it was at first glance. And I like how the lyrics are frequently of the high-minded poetic variety, but also frequently not, and how each sit on top of raw and largely unembellished production. Crunchy bright guitars from every angle, steady four-on-the-floor percussion, lead guitar whine when absolutely necessary. And that they come out of Nova Scotia—not sure why that helps, but it does.

The next thing that deserves credit—or at least attention—is stylistic variance, evidenced most basically by the songs’ either small, medium or large packaging. They’ve got the four-and-a-half-minute poetry project (medium)—I’m thinking of 'Dark Creedence' and 'Make Something' in particular—where they take a mood and light it up from three or four different angles/levels of diction. They’ve got the fleeting pop tune (small)—'Tribal Thoughts', 'Night of the First Show' —to cleanse the palate in anticipation of the centrepiece and departing epics (large): 'Delirium and Persecution Paranoia' and 'No Fear of Hellfire'. So, either they’re a group of fine poets who can alternate cleanly between modes of expression, or they’re not exactly sure which lens best befits them.

The differently sized packaging in mind, I draw a stylistic spectrum that goes like this: Punk-Tinged Ooze —> AltGuitarPop —> Full-On Morrissey Pastiche. This is another place where judgment gets kind of murky. I’m not committed to saying either that the effect is one of impressive range, or that it’s one of schizophrenic dispersiveness. I am committed to saying that I’m less impressed by the Morrissey imitation than whatever you’d call the style of 'Make Something', which falls somewhere between those first two dots on the spectrum. Which is unfortunate, because tracks five-to-eight fall pretty squarely within the Morrissey category (evidenced most clearly by 'Night of the First Show', if you’re interested). That’s not to say that it comes off as uninventive or bland, just that they set the bar higher elsewhere. Or that they set the bar elsewhere, elsewhere. The point is this: there are moments, mostly early, where you get the sense that they’re breaking new stylistic territory, and there are moments, mostly late, where their influence shines through very clearly.

A strong bottom line is that Whine of the Mystic is, above all else, an enjoyable album. I get a good bit of joy out of the poetic musings, especially when they’re held up by self-sustaining I-IV-V raw energy progressions. I get less joy out of the ones that sound like they’ve got their heels in the past. I know I’ll remember the lines, “By and large my only success comes from the things I do grudgingly” and, “The snow that falls over a calm happiness when under a blood-red moon”. I also know there will come a day when I’ll take a good, long look back at 'Make Something' and 'No Fear of Hellfire' and probably 'Dark Creedence'. And I’d recommend that you take a look too.