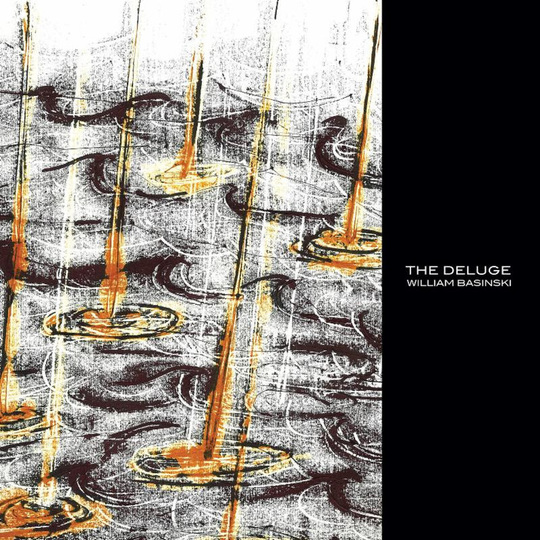 If you’re anything like me and you like either a) ambient music and/or b) process music (music made - obviously - as a result of some kind of external process) then you’ll no doubt be aware of William Basinski’s The Disintegration Loops, a stellar example of both. And, while fans of The Disintegration Loops’ backstory may not find anything quite as interesting on The Deluge there is, nevertheless, plenty of classic Basinski to enjoy here, by which I mean that if you enjoy ambient piano loops you’ll be extremely well served.

As I’ve suggested, there’s no big overarching concept behind the two and-a-half compositions here but there are some interesting ideas going on nonetheless. The tracks 'The Deluge' and 'Cascade' are variations on the same eerie, wonky looped piano part - the former is from the vinyl LP, the latter is from the CD/digital release. In 'Cascade' the loop is repeated fairly cleanly, although the piano is drenched in a magical, woozy and slightly unsettling echo; while it is certainly quite relaxing and takes you on a wonderful eleven minute journey there is something oddly otherworldly and plaintive about the whole thing. It almost reminds me of the deliberately-unnerving background music from a Silent Hill game, and I do mean that as unequivocal high praise.

'The Deluge' is obviously much of the same sort of thing but is, if anything, even more abstract and creepy. In it, the same piano part is fed through feedback loops of varying lengths, which creates all sorts of fascinating interactions. It starts off all wobbly and distorted, like a tape that keeps slowing down, and goes through an almost-draining 20 minutes of variations. Sometimes it’s spacey, sometimes it’s strung out and echoey, sometimes it feels ominously like it’s pushing down on your skull. Truth be told, it’s perhaps a little too much all at once, but it’s still a pretty relaxing and interesting piece and one that, like the best ambient music, you can pretty much dip in and out of as your interest/attention dictates.

Perhaps because there is so much repetition elsewhere but wedged in between these two takes on the same idea is 'The Deluge (The Denouement)'; in some ways, the most striking thing on offer here. It starts with another of Basinski’s trademark broken piano parts, that’s most interesting for having a lot of weird panning going on - seriously, listening to it on headphones is quite the disorientating experience. Then, out of nowhere, comes a surprise orchestral part that sounds like a Thirties radio theme, complete with heavy vinyl crackle, before that too is mixed up with and eventually lost in shifting patterns of drone. It makes a nice contrast to the slightly-overwhelming repetition of the other two tracks, and is quite the nice cleanser when you listen to the album as a whole. There’s nothing on here that’ll change your life or at least your outlook on music in the way The Disintegration Loops might have done but if you fulfil those two criteria I outlined at the beginning you should know what you’re getting in for, and should enjoy it too.