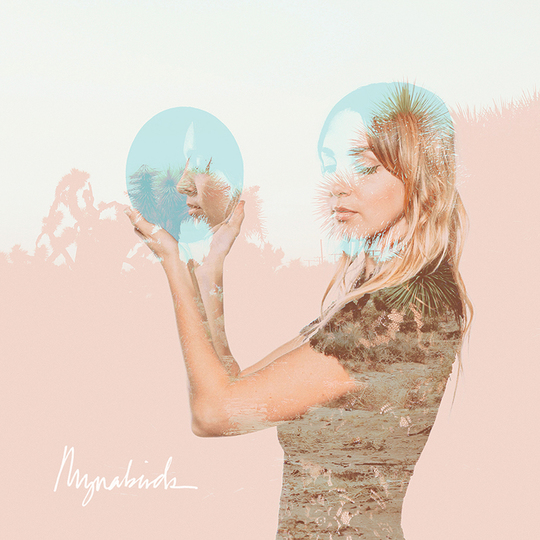 There’s something going on in the quiver at the end of Laura Burhenn's croon. Burhenn, aka The Mynabirds, has got one of those voices that as it bends, time slows and it seems to scoop a hand through a river of American legends. It’s as if her As are Elvis’s, her bellowing moments have the pixie dust of Springsteen pulled through Brandon Flowers’ widescreen larynx, and when she sings squidgy words like 'edge' it’s hard not to imagine Stevie Nicks’ eyes looming out from her record collection.

For some, these ghosts might overpower their character. Burhenn simply smirks at the amalgam of rock and roll’s past as if they’re Casper and friends, and fully embraces the rich textures of her voice. In fact, part of the wonder of her whole persona and the world her music creates, is one of mischief, dressing up and opulence that offsets the heavy-heart, which anchors her bombast. If her records to date have been praised for being understated piano-led ditties, openhearted-electro-pop and dubbed 'catchy' with a for-someone-"indie"-on-Saddle-Creek caveat, then Lovers Know has its socks pulled up to its waist, ready and waiting to box Katy Perry’s shadow.

If the tributaries which flow through her voice cast a few domineering figures in the wings, then - thankfully - the bedroom-pop she concocts shines disco lights on any overbearing shadows. There are big floor toms, shimmery Nile Rodgers-ish guitars and glorious synths that spool out to the cocktail coloured sunset on the horizon. The contrast of olde world and the new make Lovers Know a refreshingly timeless addition to the heap of needlessly nostalgic or nasty-pop tropes that have cluttered DiS’ inbox post-Lana Del Rey.

Lovers Know darts effortlessly from sumptuous synths to the simply sublime. Highlight of the record ‘Semantics’ has that same shoulder-bounce, twirl your head around like you’re on Sesame Street "vibe" as Feist’s ‘1, 2, 3, 4’. With its burbling bass and cheeky piano it also sounds like the classic pomp-pop song the world has been waiting for The Killers to write for about a decade. It’s a tune that's filled with glorious turns of phrase (“You know I only feel half-crazy, a roman candle at the water’s edge...”) and there's a little falsetto that has the charm of a Pixar montage. 'Semantics' is a song that could - given the right boot into the hearts and minds of the unsuspecting public - even be a contender for song of the summer (it's certainly wrestling Carly Rae Jepsen's 'Run Away With Me' to be mine). So, wherefore art thou music supervisor for Hugh Grant’s next movie…?

There’s a lot more to this record than one scintillating single. Which is kinda what you’d expect from an artist with two albums on Saddle Creek under her belt, a background playing classical piano and joining party-bands in Washington DC, not to mention a stint performing with one of Q and Not U (as Georgie James), and a dayjob touring with Postal Service.

‘Semantics’s aperitif ‘Say Something’ has a swarm of discordance and unnerving tonal shifts (not a billion miles from label mate Bright Eyes’s Digital Ash...) alongside a shuffling groove and dead-pan lines like “start a war or don’t get out of bed”. With a similar grace, ‘Orion's late-night lament to a distant dream man, with a soaring Orbison pre-chorus that tumbles into a wonderfully understated breakdown and a playful little hook shows there's far more than one stuck-on-repeat track to shove on your next Spotify playlist. In fact, it’s one of the first clues that she’s the double expresso to Lana’s latte.

She’s far more than some throw-away girl-on-girl comparison with one big tune though. ‘Wildfire’ has a bar-rock jangle and a big hand-clap friendly chorus that’s begging for a big sing-a-long-until-you’ve-lost-your-voice. There’s ‘Shake Your Head Yes’ with a simple drum machine and hint of 8-bit Eighties pop that isn’t a million miles from some of the best bits of Give Up (perhaps the dayjob slunk into her subconscious?). There’s also ‘The Hangman’ – crashing exit music for a movie about a cowboy chasing a black rainbow, the Air re-soundtracking Up wonder of ‘Believer’ and... and I'm not going to mention every track, but I could.

If Lovers Know initially feels like it’s dipping into the golden age of the American songbook, then this must be the most fruitful panning for gold to be released in eons. Treading the boards beneath blinding light, glitter stuck to its sweaty skin, shaking its tail, Lovers Know is an undeniable alt-pop album that teeters on kicking any caveat and going fully-blown Pop - but we’d need the magic of Laurel Canyon and shimmering Sixties Vegas to overtake EDM’s dominance on modern-pop for that not to sound like silly journalistic hyperbole. Sorry (not sorry).