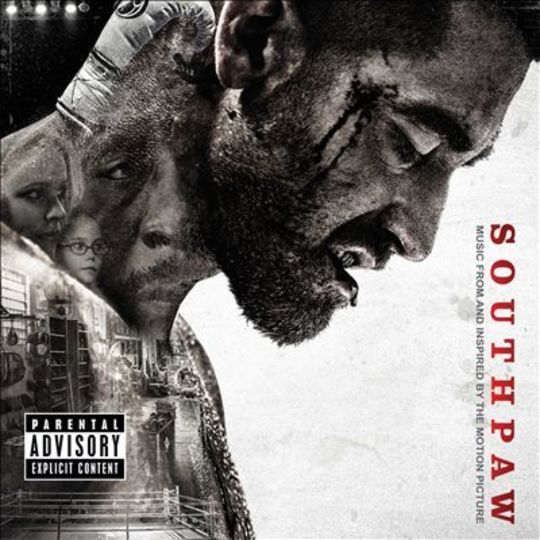 Movie soundtracks, at their best, add a definitive quality to the films they accompany. It’s hard to imagine Jack Nicholson’s chopper spitting dust from its back wheel in Easy Rider without ‘Born To Be Wild’ playing in the background, or Ewan McGregor’s sprawling monologue in the movie adaptation of Irvine Welsh’s Trainspotting without Iggy Pop wailing about “liquor and drugs” in ‘Lust For Life’. Without the visuals, however, they rarely hit the mark. Cliff Martinez’s work on Drive (with the help of Ryan Gosling’s pensive stare and lack of dialogue) had hip young millennials ovulating en masse, but that soundtrack is one of very few success stories. Eminem has taken up the executive producer role for the soundtrack of Antoine Fuqua and Kurt Sutter’s new film Southpaw, but does it deliver separated from the film?

For a brief bit of context, Southpaw is the latest boxing film to hit the big screen and stars a chiselled Jake Gyllenhaal as a boxer down on his luck. The story is well-mined and holds no real surprises; boxer suffers tragedy and hits bottom, dabbles in drugs and alcohol and struggles to get back to the top with the help of a veteran trainer.

Musically, the album works well to develop the film’s overriding theme of redemption. The tracklist goes through the stages of the lead protagonist’s story, detailing him at the top, his love interests and a continual struggle for survival. Separated from that, however, there are a number of pitfalls. The record isn’t a particularly cohesive piece of work. On the one hand, it does endeavour to explore a wide variety of styles, from an amalgamation of heavy metal, rap and bass warbling, Skrillex styled dubstep in Rob Bailey & The Hustle Standard's ‘Beast’, to crooning from The Weeknd in ‘Wicked Games’, but this scope leaves it feeling slightly confused. It would inevitably make more sense with the accompanying visuals and story of the movie, but as an independent entity you are forced to imagine those gaps for yourself.

For these pitfalls, there are shining moments in the release and, individually, the tracks work. Eminem plays a key role, as you would think, and the tracks he raps over play out like you would expect modern day Eminem songs to do. ‘Kings Never Die’ has rock sensibilities, a female singer for the hook – Gwen Stefani – and exhibits Eminem’s penchant for fast paced lyrical ability. ‘Phenomenal’ which provides music for the film’s trailer, is expansive, aggressive and is again constructed in trademark post-Relapse Eminem style. Outside of Eminem’s role in the release in a solo capacity and as part of Bad Meets Evil, the album develops more personality. Action Bronson and Joey Bada$$ provide the album’s boom-bap highlight in ‘What About The Rest Of Us’ where Rico Love sings “Lord have mercy / it’s like the world we live in was only designed for somebody wealthy / But what about the rest of us?” Bronson and Bada$$ provide traditionalist flow to a largely modern hip hop record, giving respite to anyone still pining for Eminem material circa 2001. The other major highlight is the recycling of The Weeknd’s already-released ‘Wicked Games’ which stands adrift of the rest of the album, but breaks it up from an aggressive narrative that runs throughout.

Unfortunately, Southpaw probably won’t go down in the annals as an era-defining soundtrack and without the visuals to accompany it, it doesn’t provide enough impact to set it apart as an independent entity. However, it does succeed in developing the story of the film and that is its main function. If you’re looking to hear what the next Eminem or Bad Meets Evil album sounds like, this could be a precursor, but aside from that seeing the film and hearing the music in the context of the story is probably the best means of consumption.