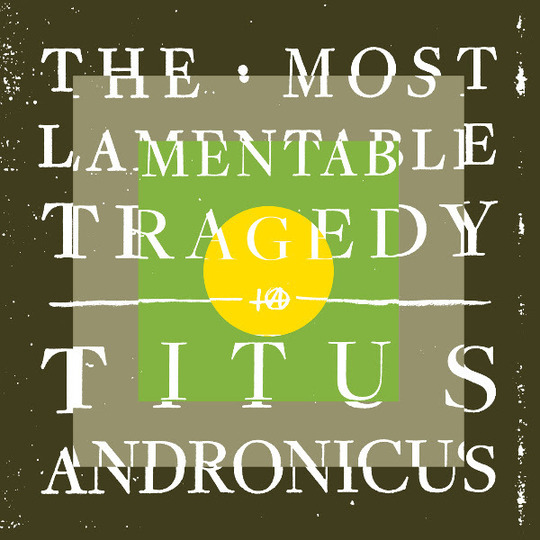 ”’Cause tramps like us, baby we born to die.”

About an hour into The Most Lamentable Tragedy, the most ambitious project from New Jersey hellions Titus Andronicus to date, a distorted bell strikes dread during a warm choral rendition of ‘Auld Lang Syne’. It’s a warning, a reminder of the passing of time and how things can go from safe and happy to perilous and painful in the blink of an eye.

Patrick Stickles’ voice has long been a many-splintered thing, laced with raw punk candour and unconcerned with polish. In subverting Springsteen with the above spin on ‘Born To Run’, Stickles infused 2010’s ‘A More Perfect Union’ with wry gallows humour and grim contempt. The words that close that song - taken from an editorial piece penned by abolitionist William Lloyd Garrison - serve to kick off American Civil War-inspired opus The Monitor in goosebump-provoking fashion but they also speak to a more personal battle.

The dissenting voice in one’s head, the thoughts that bounce around the brain of anybody who knows the cruel sting of struggling with mental health issues, have the capacity to overwhelm and sabotage. It wins, you lose. You can name it, personify it and tell it that you’re in charge but such defiance cannot hold forever. It will be heard. For Patrick Stickles, his most inventive method of dealing with demons has manifested in the form of a 29-song, 93-minute rock opera concerning, life, love, the pursuit of happiness and - but of course - the harsh inevitability of death.

The sound, scope and concept of The Most Lamentable Tragedy all bring to mind Fucked Up’s excellent David Comes to Life but perhaps a more interesting analogue would be that of Muse’s misguided and charmless Drones. Both records deal with a despairing protagonist (here dubbed ‘Our Hero’) who crosses paths with his doppelgänger whilst combating indoctrinated obstacles and oncoming horror. While Matt Bellamy drowned in pretension and tone-deaf bombast, Stickles astutely embraces the grandiose, distilling his troubles into some of the sharpest songwriting of his career and a spectacular display of ownership.

Stretched across five acts, The Most Lamentable Tragedy is an exhausting affair but then it absolutely must be so. There’s a punch-drunk quality in place as the first few numbers play out and Stickles switches from aggressive orator to Broadway-bathed showman by the time ‘Lonely Boy’ strides into gear. In the space of just one Seinfeld-referencing stanza, he manages to paint a smart picture of isolation, danger and hopelessness:

”Let me tell you how it goes in the big city
There ain’t no mercy and there ain’t no pity
And everywhere you turn there are hundreds of humans
All opening the door saying ‘Hello, Newman’
And hearing people hearing themselves talk
I tell you those are fingernails where there should have been chalk
I heard this one guy tell this other one to suck his cock
And he was the richest, smartest guy on the block”

All set to a gloriously jaunty piano and drum beat and a rising sneer from its author, natch. The juddering clash of devil-may-care melancholy continues apace with ‘I Lost My Mind’, a karaoke call to arms that manages to treat manic depression as a dark buddy comedy without ever trivialising the subject. Given the duelling musical nature of The Most Lamentable Tragedy - swift punk pronouncements swing for space alongside classical pop waltzes - it’s apt that the introduction of Our Hero’s reflection skews the narrative somewhat, bringing disorder and a little chaos to the mix. At its heart and always beating is that voice again, defiant, bedraggled, triumphant, pained, optimistic and forever on the cusp of breaking completely. ‘Fired Up’ and ‘Dimed Out’ land a killer one-two punch, both not so much tapping into this conflicting duality but rather grasping it by the collar and going for the jugular.

”Whatever’s inside, let it climb out / That was his plan and it’s mine now”, hollers Stickles as his leading man loses control. Moving forward, ‘More Perfect Union’ casts new eyes on an old idea. Inside ten minutes, we drift from wartime campfire lament to feverish rock shuffle to a dizzying orchestral flourish. Much like its parent record, it’s quite a lot to take in. The following eighty-second silent intermission isn’t just welcome, but quite necessary. And you’re only halfway through. The story twists and turns appropriately, taking in further determined anthems of doomed youth (‘Fatal Flaw’), a Pogues cover (‘A Pair of Brown Eyes’), reclamation (‘I’m Going Insane ( Finish Him )’) and hey, just maybe, some form of redemption (‘Stable Boy’).

In the words of the departed ‘Rowdy’ Roddy Piper, a charismatic scrapper who excelled at some of the strangest theatre you’ll find;

”I’m trying to find my place with peace. And if not, let’s fill it with mayhem.”

We’re born to die, sure, but attempting to conquer the whole ‘living’ thing along the way is a cause worth shining a most innovative spotlight on, especially if it means kicking the shit out of it from time to time.