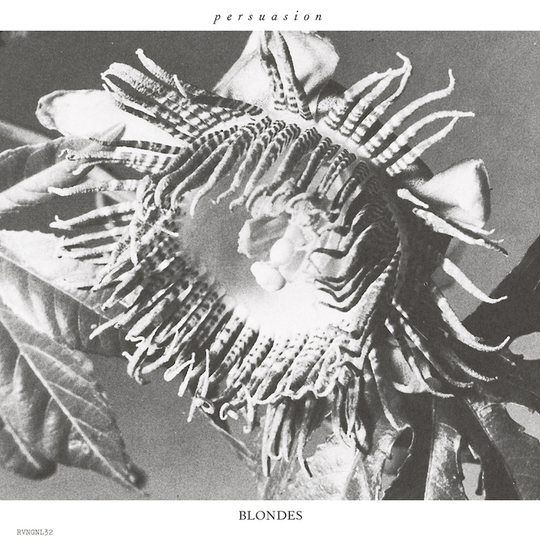 Two years on from their last kaleidoscopic techno record, the absolutely astounding Swisher, Blondes, the Brooklyn duo of Sam Haar and Zach Steinman, return with a new album of sorts, split over two different releases and highlighting two different sides to their brand of oozing, languid techno.

'Rein’, a single track issued on cassette, is basically a near hour long jam from their studio - full of pulsating textures, stuttering drum machines, and swirling atmospheres. Of the pair, it's the closest you'll get to the dreamy techno sound that they've made their own, but if you're expecting another Swisher, you may be disappointed. That's not to say this isn't a great piece of work, because it is - but think of it more as a wildly experimental komische jam full of burbling rhythms and punctuated with glassy arpeggios, so don't go in expecting Swisher pt. 2, and you'll be fine. It has traces of Voices From The Lake's excellent debut album from a few years back, but feels more like it's demented cousin than carbon copy. A slowly churning beast, it shifts and moves at a glacial pace, but leaves just enough breathing space for everything to get explored in depth, and taken as one whole piece of work, takes you on the slowest, strangest rollercoaster.

Persuasion sees Blondes abandon the slow burn approach and chuck any kind of subtlety straight out of the window. On this (much shorter) EP, the band trade in their haze of dense pads for higher tempos, more structured arrangements, and harder sounds. The trippy fog of synth pads have gone, and in their place is a much tougher feel - the Berghain bass of the title track a good indication of what's to come. Skippy hi-hats and gurgling arpeggiated synth (they've not ditched everything, it would seem) bounce on a relentless 4/4, taking in their penchant for hypnotic electronica, but melding it to the dancefloor. And that is what this is - a pure dancefloor record. It's still out on it's own, and when compared to most other dancefloor staples, sticks out like a sore thumb, but this is Blondes at their most heads-down ferocious.

'Son' melds screeching synths and rattling percussion to a bed of dub techno pads and a particularly anguished vocal sample, and just pummels the fuck out of them for a good 9 minutes - it's no holds barred stuff, and barely stops for it's entire duration. 'Inner Motive' rounds up the EP (told you it was short) with a collage of synth squeals, set to what sounds like one drum loop and a tiny fragment of bass, which coincidentally is pretty much the only harmonic element here. Strangely though, it works - it sounds like techno beamed from the future and recorded through a wind tunnel. In a good way.

It's good to have Blondes back, and it'll be interesting to see how RVNG INTL release these two, after the surprise 'here you go, take it' approach they took to Swisher. Regardless to how it comes into the world though, it's a stunning collection of the most forward thinking dance and electronica I've heard all year - one part of me wishes Blondes would just rise up and overtake the Four Tets of the world, if for nothing else than a fucking change to festival line-ups, but that wouldn't be their style, I suspect.