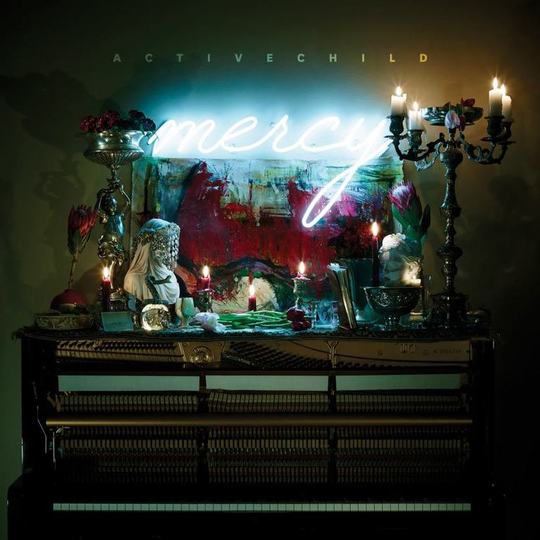 For those at a loose-end and with the wherewithal to have a crack at making an Active Child record, as a starter for ten you'd be in good stead with a gander at the album cover for Mercy.

There you'll find Pat Grossi's ingredients for the cauldron laid out: alabaster busts and neon lights, a Margiela-esque mask half-inched from Kanye and a faded photograph, exotic pink flowers and gaudy gold ornaments. There's even a crystal cube with a laser etching of Grossi's own face in it, his face etched the kind of stern seriousness appropriate for someone trapped within a crystal cube for eternity.

In the meeting of the organic and synthetic, the classical and the modern, there's a duality and a tension that defines Active Child's sound. It's there in the delicacy of his signature harp matched with the crashing synthesised drums of 'Stranger'; it's most definitely there when that prodigious falsetto honed by his choral upbringing, delivers lyrics pouring his heart out about the light and dark of his relationships with a raw earnestness as on 'Darling'. The result is a sound that's old world technique bred on Noughties synth-pop and R&B sensibilities - Chopined N Skrewed if you will (please don't) - deeply atmospheric, romantic music that moves with the clip and verve of a pop framework.

When Grossi nails the sweet spot between these two poles the result is nigh-on perfection (Curtis Lane’s 'I'm In Your Church at Night' and 'Hanging On' from 2011’s gorgeous You’re All I See to seize on the most obvious). The disappointment with Mercy is that he never quite finds that spot to the same extent.

A pure vision of the world has always characterised Active Child, in particular surrounding the kind of purity with which the human race ought to experience love. This drive for purity has now extended to the production he uses, with the stated aim intention that: 'I wanted my voice to be heard and not just felt'.

This vocal purity can be one of the record's main triumphs, as stripping away production layers allows his voice to truly transcend to centre-stage and consequently heightens the compelling vulnerability of the record’s narrative thread (in essence, the rise and fall of a relationship), in particular on the opening one-two combo '1999' and 'These Arms', and deeper cuts 'Darling' and 'Lazarus'.

At the same time, recognition of what Grossi wants the function of vocals to be within Active Child opens him up to stripping them out entirely, as on the instrumental 'Midnight Swim’. As a chapter amidst the overall narrative it's actually one of the most successful, the absence of words spotlighting Grossi's inventiveness with sound: capturing the setting and a moment of breakdown in the narrative with the tense build from lightly plucked strings to echoing dissonance.

The problem that emerges with stripping those production layers out is that, though this simplicity benefits some songs, elsewhere losing the mystique of these filters means the extra level of intimacy involved can be pushed too far and actually creates barriers that limit where Grossi can comfortably venture to in his lyrics.

At one end of the spectrum, the repeated focus on the high drama of relationships, to have someone "always on your mind", to be "saved" by a lover, to be "given a sign" by an ex can't help but eventually feel bland, and closing track 'Too Late' with its one man, a piano, a shit-ton of strings and a broken heart set-up flirts with fully following suit.

At the other, there's an unhappy dalliance with the clunkily pseudo-seductive. Grossi's first dip into lounge with 'Never Far Away' jars, but 'Mercy' escalates the awkwardness tenfold "You can do it, baby show me what you got / Gimme what you got now" and by time his elsewhere angelic falsetto is delivering lines like: "No more than just a one night stand / No regrets, no future plans / Addicted to the games we play / But I know that you can't stay", we've wobbled perilously into Robin Thicke territory and no one walks away feeling good about themselves.

It’s clear listening to Grossi’s second full-length that he remains a prodigiously talented artist with a rich, eloquent and readily identifiable sound, whose capabilities when it comes to producing moments of sheer beauty have now been bolstered all the more by a heightened confidence in the tools at his disposal. As a lyricist and a songwriter though, the steps he takes and horizons he's expanded with each release to-date have made it equally clear that certain modes and stylings suit him far better than others. With that disparity in mind then, how he moves forward from Mercy will be very interesting to witness.