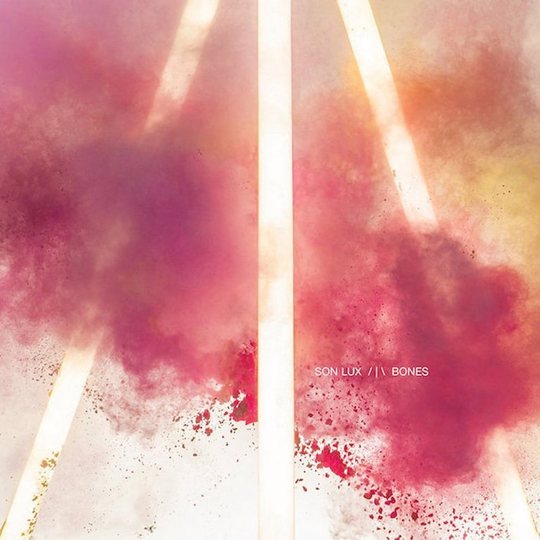 If anyone thought that Son Luxs expansion to a conventional guitar-drums-vocals three-piece hailed the end of front man Ryan Lott’s sonic experimentation, then fourth album Bones comes like an almighty, juggernaut to the face. With drummer Ian Chang and guitarist Rafiq Bhatia added for a beefier, live band feel, the complexities of composition have been pushed even further than 2013’s Lanterns , and at all times the music threatens to tip into wonderful cataclysm.

With a knack of bringing order to heaps of seemingly chaotic and dissonant sounds, and fashioning melody out of the unorthodox, it’s no wonder that Lott has amassed an impressive list of collaborators from the more discerning corners of the mainstream. He’s worked with Boots and Lorde, as well as on Hollywood film scores, and while these projects have put him in demand, it is under his self-made Son Lux moniker that he is most at home and Bones is the sound of an artist wielding a scary amount of autonomy and inviting us in to have a tentative rummage.

From start to finish Bones plays like a coagulated, cosmic soup, a universe tangential to Flying Lotus’s Cosmogramma that bursts and bristles with unlikely sonic companions, brought to order only by recurring musical motifs, the dominant lyrical themes of identity and isolation and the odd pop hook. Opening track ‘Breathe In’ beckons you with the line “close your eyes, swallow the sun/You have only just begun”, a sort of warning for what is to follow. It’s a line that also resurfaces periodically to provide a comforting presence amidst the labyrinthine sounds, kicking off with the dubstep tinged euphoria of lead single ‘Change is Everything’. It’s a track of epic, stadium sized proportions though one that at all times refuses to be pinned down. ‘Flight’ and ‘You Don’t Know Me’ continue in the same pattern with all things at once; hip hop, post dubstep, EDM and post-rock, all of which have been hacked to pieces and thrown up in some anti-gravity chamber where the listener is asked to enter and appreciate their intertwining colours. Frail and trembling vocals seek to impose order amidst the stuttering, shuffling beats and bass and while there are frequent moments of quiet and peace - a solitary handclap here, a snare-hit there, you are always aware of an encroaching electronic cacophony as with the Aphex Twin delirium at the end of ‘White Lies’.

Elsewhere the percussion borders on tribal (‘This Time’ and ‘Undone’ especially), but the songs still pulse with stunted electronic influences as if composed in a sci-fi Berberian Sound Studio. It can be hard to follow, and at times you’ll feel a little lost, but the moments of clarity make it all worthwhile. ‘Now I Want’ best encapsulates Son Lux in all its perplexing appeal: With the resounding chorus vocals “now I want to be free” ringing out triumphantly from within the darkness, and the beautiful simplicity of the accompanying piano, it’s clear that there’s a bone fide pop songwriter buried beneath the extravagances. Luckily for us though, Son Lux veers away from the straight forward and chooses to make records as wonderfully complex as Bones