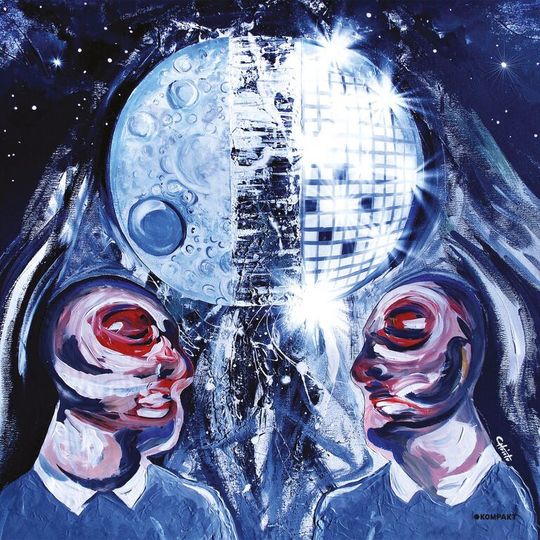 Approaching 28 years in the game, and on their sixth incarnation as a band, The Orb make a welcome return with Moonbuilding 2703 AD - their first original album for quite some time, not counting the collaborations, best ofs and remix albums that have endlessly churned from Orb HQ over the past few years.

More than just a re-tread of old ground, thankfully Moonbuilding… finds the duo, currently comprised of Alex Paterson and Thomas Fehlmann, in fine form - over four lengthy (what else?!) tracks, they manage to distil that classic Orb sound, but also give it a bit of extra purpose, more focus and a nicely taut production sheen to boot.

Despite legal wrangles over credits and label affairs, a bitter fallout with past member Kris Weston (who blasted Paterson, former production colleagues and others in a massive rant last year) and other such troubles, the album remains a strangely perky affair. Never ones to take themselves too seriously anyway, Paterson and Fehlmann inject a peculiar sense of humour rarely found in such a naval gazing environment as ambient techno.


Often times it's actually closer to the ambient techno of say, Deepchord and early Andy Stott, than their early Nineties heyday, but this is by no means a bad thing. The dub techno pads that echo throughout opener 'God's Mirrorball' are a good indication to the rest of the record - it actually sounds kinda fun. Reminiscent of their collaboration with Pink Floyd's David Gilmour on the 'Metallic Spheres' album, it's a spacey, far out trip, and this time sans Dave's endless noodling, which ended up overcooking that album slightly.

Elsewhere on the album, there's the driving, tom-heavy rhythm of 'Moon Scrapes 2703 BC', which follows as a nice bookend to the opener, and gives the record a bit of heft as it rolls onwards. 'Lunar Caves' is more in line with their sample happy early days, and if it wasn't for those dub techno pads pinging all over the place, you'd be forgiven for thinking it was a long lost cut from The Orb's Adventures Beyond The Ultraworld - their monstrous, epic debut album. The record ends on the slightly out-of-place, but-that's-kind-of-ok 'Moonbuilding 2703 AD', which is basically a dreamy amalgamation of the entire album, but set to a skipping, almost J Dilla-esque breakbeat. At times, it's a little reminiscent of the Avalanches' Since I Left You - a slightly bizarre way to end the record, but not a bad one by any stretch of the imagination.

It's an album heaving with ideas, but just coherent enough to stick together as one piece of work - it's slightly erratic at times, and perhaps a bit of prudent editing might've aided matters, but c'mon - this is The Orb we're talking about. Perhaps it's Fehlmann's influence on this era of The Orb, or maybe it's simply the sound of a band evolving into something new, but whatever it is that's got them here, it doesn't really matter that much in the end, as it's a great little re-introduction to all things Orb. Long may they continue...