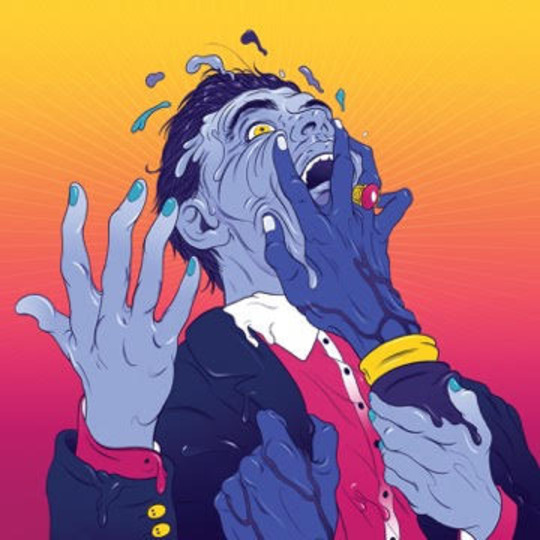 Day-glo. Neon. Technicolor. Kaleidoscopic. It’s difficult to write about Everything Everything’s eclectic music without being tempted to go into reckless adjectival overload to emphasise the chromatic range of their vivid art rock. So let’s use an analogy instead. Theirs is a musical Fauvism; songs painted in broad, bold strokes and splattered with ideas like a breathless novice paintballer tangling with dead-eye experts. The issue was that what was being painted wasn’t always quite as important as how it was demonstrably being done. That’s now changed.

At first blush album three is more of the same again. It even feels like a step back from the wonderful Arc and its spacious, wounded optimism. Get to Heaven is a pop record, unashamedly and unabashedly. Its 11 songs barely pause for breath as tumbling, gymnastic guitar riffs and juddering synths meet the idiosyncratic vocals of Jonathan Higgs, who toggles between gabbling his lyrics, cawing like a distressed seagull, and deploying a keening falsetto as dance music is often filtered through indie rock’s strictures with playful abandon and consummate ease.

The record is certainly the best distillation to date of a band whose careening fun places equal value on Radiohead at their most brow-furrowed and novelty chart hits without any trace of preening post-irony. Everything’s up for grabs. Lead single ‘Distant Past’ mashes house chords to tripping breakbeat, somehow resulting in a sci-fi tropicalia with a guest appearance from a Star Trek communicator sample. ‘Spring/Sun/Winter/Dread’ finds a disco four to the floor funk squaring up to wonky synths, monkish backing vocals and Van Halen guitar solo, while ‘To The Blade’ is just the sort of schizophrenic and frazzled apocalyptic rock Muse should really be bringing to wake up the sheeple.

All of this is well and good, however it’s to overlook a key facet: Everything Everything can, remarkably, also now do subtlety. Nuance and depth of feeling have now burrowed into the band’s DNA, unexpectedly from a band that dress like they’re about to enter a Quidditch tournament. Arc’s softer side and melodrama is present and correct, it was just playing dead - swaddled in hooks that bring on floods of dopamine.

The idea germinates on ‘No Reptiles’, enabled by characteristically weird context. ”Oh baby it’s alright to feel like a fat child in a pushchair / old enough to run, old enough to fire a gun” Higgs sings on the chorus, his voice suspended nakedly over a clonking drum beat. First time you hear it you’ll snigger. The line repeats, and as beatific synths and soft harmonies close in the daft becomes oddly meditative then, slowly, the treatment reveals a wounded tenderness behind the façade. It then opens the door to Higgs’ own pathos as he pleads for self-knowledge (“just give me this one night just, one night to feel like I might be on the right path”), just the sort of direct emotional plea not previously in his range. It’s typical of his delightfully offbeat lyricism that’s inventive without ever being jazz-hands ZANY and rueful without shrugging itself into a void of self-absorption.

Such readings lurk all over the record. Many are given over to a more serious, socio-political edge, and this gives material substance – something also previously lacking. ‘Fortune 500’ is distinctly anti-authoritarian, a palace interloper triggering an alarm of spinning synths to be talked down by tremulously compliant security (“I’ve won! I’ve won! They told me that I’ve won!”). ‘Regret’ has powerless, bitter recriminations dressed in a suicide vest, and the black humour of the title track has a martial cataclysm juxtaposed with its narrator’s petty self-interest - “…as the tanks roll by under a blood black sky I’m thinking ‘where in the blazes did I park my car?’" - that leads to the band’s most joyful chorus yet. Higgs’ simian fixation is particularly entertaining as well as implying we’re regressing as technology empowers nothing but our own demise. We’re nowhere near as clever as we think we are.

It’s advice the band have taken themselves to scale new heights. Everything Everything have gradually reined in their initial bent to do, well, everything just because they could, gradually sanding down the clever-clever math-rock of quixotic kitchen sink debut Man Alive. They now harness their energy and admirable imagination to serve a song as precision-engineered pop chops have displaced the wilfully outre. They can now justifiably join the pantheon of a particularly British type of pop eccentric, with Wild Beasts as their only equally able contemporaries, where their music effortlessly teases the edges of both humour and emotion, flicking between the two without ever feeling contrived. Making more of their new-found social voice could yet see them make another leap from being a good band to a landmark act.