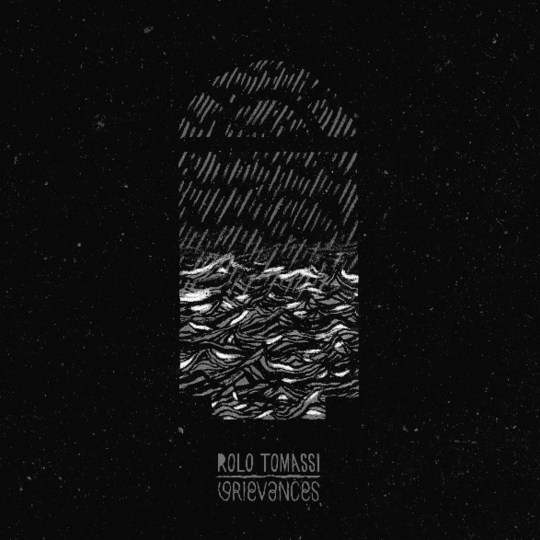 Rolo Tomassi have always been a cut above most of the competition. Their schizophrenic sound meant that when they first emerged from the Sheffield music scene they immediately stood out from the crowd, but it’s as they have modified and progressed their sound into less restless territory than the band have really emphasised just how good they are. If debut record Hysterics was Rolo Tomassi announcing themselves with a bang, then Grievances is the more mature explosion that proves once and for all just how good they are. It’s no less impactful than that debut record, but the route it takes to making its point is more nuanced than ever.

Opener ‘Estranged’ should satisfy anyone worried that the band may have gone soft. The first minute of this record sounds like Converge on steroids, approaching almost grindcore-esque levels of intensity. There’s a more restrained section just over a minute in, but it’s difficult to focus on that when Eva Spence is at her guttural best. Second track ‘Raumdeuter’ is where things really start getting expansive. On one hand it’s reminiscent of Album of the Year Faith No More (interestingly, Rolo Tomassi are now signed to Mike Patton’s Ipeac label in the States) with its colossal sounding guitars and oddball anthemic qualities, but there are also hints of the likes of Nation of Ulysses and Radiohead from where I’m sitting. It’s this track that marks a real statement of intent for the record to come; a forewarning that what is to come showcases a more diverse, yet also more coherent sound than anything Rolo Tomassi have ever put together before.

‘Opalescent’, already released as a single, sounds rather insubstantial on its own, but in the context of the album it’s a triumph. It’s a slow-burner, but one in which the dynamic interplay between the group’s four players works magnificently. It’s this track – its introduction, ‘Prelude III (Phantoms)’ included – that really emphasises how fantastic the of Grievances is. Gone are the days when the Rolo Tomassi route forward was to pack an album full of bruising, and exhausting, bouts of violence with only the occasional break. Even on 2012’s Astraea – which was easily the group’s best to date – this balance was occasionally somewhat awry, with stacks of heaviness colliding with occasional brusqueness against one another. This never happens on Grievances, with the record’s flow meaning that the string-bearing ‘Crystal Cascades’ and ‘Chandelier Silver’ can sit between the full-throttle romp that is ‘Stage Knives’ and the delicious, furious masterclass that is ‘Funereal’.

The latter track also emphasises another point. It begins like a lost lo-fi black metal gem from the early Nineties, only breaking into more familiar Rolo Tomassi territory 30 seconds in. There’s a section dominated by foregrounded bass and drums that sounds almost reminiscent of a sludge breakdown, as well as a good deal of Refused-esque post-hardcore brilliance. Whilst it’s always been true that Rolo Tomassi have been more than Converge and Dillinger-aping mathcore maniacs – how much they’ve ever sounded like the latter of those two groups is particularly questionable to these ears – ‘Funereal’ emphasises just how good the band have got at melding different styles of heavy music together as well as simply different styles of music. This is a band that can now switch from titanic bouts of metal to piano-led post-rock (James Spence has almost completely abandoned the 'computer game'-esque synth sounds that were so prominent on the band’s early releases) without losing steam, but it’s also a band that knows a wide variety of ways to kick your teeth in.

Most album closers would struggle following something as comprehensive as ‘Funereal’, but Rolo Tomassi have always excelled at the back end of their records, and that’s no exception here. ‘All That Has Gone Before’ not only seems an excellent way of summing up the seriously dextrous nature of Rolo Tomassi-circa 2015, but it’s also probably the most convincing epic the band have penned to date. Eva Spence’s haunting clean vocal refrain of “We can’t be loved as we are” making a suitable – but, to this listener at least, incorrect – epithet to the band’s complicated, multi-faceted nature.

It’s easy to praise a band for being good at what they do, and it’s particularly easy to praise bands for tearing up their own rulebook and starting anew with impressive aplomb. However bands often don’t get enough credit for building slowly and steadily upon their sound. Ten years on from their formation Rolo Tomassi sound completely different to the teenage outfit that emerged, kicking and screaming, from the Sheffield underground. That’s not to say they have lost their vicious hardcore inclinations, or their rampant commitment to chaos. Instead it’s merely to point out that, as exciting as they were all those years ago (and trust me if you missed it – they were bloody exciting), they are now so, so much better. Bands shouldn’t be able to pull off all the tricks Rolo Tomassi pull on Grievances whilst sounding like they are barely breaking sweat, but that’s how assured these five musicians now are.

It’s an amazing thing to be able to say that a band sound like they could do anything they put their mind to, but it’s something I can say about Rolo Tomassi without hesitation. Grievances is yet another remarkable record from one of the UK’s most consistently remarkable underground bands.