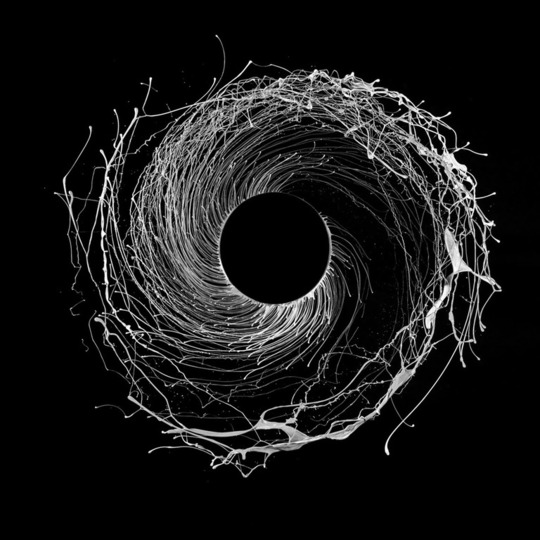 An innately mercurial art form, jazz flourishes in fluidity rather than constraint. Dawn of Midi’s debut — the aptly titled First — was a pleasant, albeit largely unremarkable free jazz LP, which followed along those lines, dipping into the realms of improvisation and avant-garde minimalism. But the Brooklyn ensemble’s second album — Dysnomia — sees them ditch the looser freeform elements of their native genre and craft a idiosyncratic and truly phenomenal work.

Ostensibly the group remains a jazz trio in the classic sense; plying their trade with traditional acoustic instrumentation. But less reliant on conventional melodic anchors, their output now hinges on the kind of loops and rhythmic fractals that see them edge closer in tone to minimal electronica, modern classical composition and trance-like tribalism; fuelled by rigid and unyielding reverberations that writhe and pulse in restless hypnotic brilliance.

In some respects, Dysnomia is best viewed as a single 46-minute arrangement. The nine tracks — each named after a different astral form — act as suites that compartmentalise rather than disrupt the album’s flow; waypoints on a map to aid listeners across their taught and unsteady landscape. And while the group might not offer an easy listen, they do allow for some release amongst the increasing intensity. The trio’s elliptical forces occasionally emerging from the darkness in blinding luminosity. Aakaash Israni’s dense bass is the kindling, Qasim Naqvi’s subtle percussion the propellant and Amino Belyamani’s astonishing work on the piano — which is part played and part plucked — is the spark for momentary polyrhythmic explosions that flare in timed precision, before dissipating trifold into the atmosphere.

If this all sounds a little airless on paper, in practice it’s entirely transfixing. Dysnomia’s mesmeric resonance built with masterly precision, note by note and loop upon loop until it has you locked tight in its grasp. It's a tumultuous fervor that makes as much sense drowning out the world on headphones, or in the quietude of the night, as it might do blasted at full volume across the the sweat-drenched strobe-lit crowds of a Boiler Room session; evoking the cadences of Richard D James, Steve Reich, Autechre and Moroccan Gnawa music than anything recorded by Ornette Coleman or Sun Ra.

An improbable triumph that transcends straightforward description, Dysnomia is simultaneously a jazz album unlike anything you’ve heard before and an accomplished minimalist electronic album…which…errr...contains no electronic instruments whatsoever. Originally released in the US almost two years ago, it's ripe for discovery on a new continent, the band now finding a natural home amongst Erased Tapes exceptional stable of artists. If you were one of the few who picked it up on initial release, you’ll already know it manages the unlikely feat of providing almost immediate pleasure while richly rewarding repetition, but if you haven’t heard it yet, then I'm envious at the wonderful journey that awaits you.