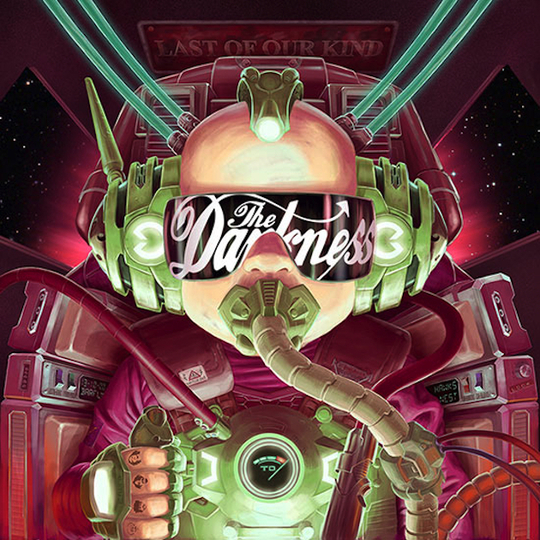 In the grand scheme of things, it's strange that the whole Darkness story even happened on the scale that it did. At the time of their breakthrough in 2003, popular guitar music was firmly planted in another part of the spectrum. We were on the eve of emo's Noughties revival, in which vulnerability and introspection were all the rage, while the charts had the mirthless fuckery of Keane to look forward to. It wasn't particularly fertile soil for big-haired, big-riffed cock rock. Nevertheless, the Lowestoft lads' bold, brash debut Permission To Land struck light a bolt of lightning and thundered its way to the top spot.

Perhaps it was the sense of carefree, over-the-top fun in a more straight-laced music scene, a piece of escapism for a country in the midst of a war on terror, or a nostalgia trip for the old and a history lesson for the young. Whatever the case, the mainstream took to said record like Justin Hawkins to a catsuit. Unapologetically anachronistic with their pyromaniacal, falsetto hijinks, the first incarnation of The Darkness burned brightly but all too briefly. Picking up awards and festival slots like they were going out of fashion, they rode the wave of fame – and the odd flying tiger – to multi-platinum heights. Troubled and costly follow-up One Way Ticket To Hell... And Back kept things ticking over until 2006, when the pressures of fame and the singer's taste for party powder spelled the end. A triumphant return to Donington with stylistic forefathers Def Leppard five years later brought things full circle, and provided a jump-off point for third effort, Hot Cakes. The title was tempting fate a bit.

Things have started to heat up since the tepid comeback. Perhaps it was the new blood within their ranks in the form of prolific sessionist Emily Dolan Davies, who replaced ailing drummer Ed Graham (Rufus Taylor, son of Queen's Roger, has since taken her place behind the kit). The moniker Last of Our Kind might be a bit ironic, given the palpable resurgence of classic rock-inspired acts that followed and populate the airwaves today, but their specific brand remains inimitable.

Opener 'Barbarian' sounds like Freddie Mercury fronting Iron Maiden and chronicles the history and legends of their native East Anglia, a heavy metal thematic they've long since employed on the likes of 'Black Shuck'. Then comes 'Open Fire', a full-throttle call-to-arms – although Ian Astbury might be on the phone about its 'She Sells Sanctuary' likeness – and the whisky-soaked, serpentine riffs of 'Roaring Waters'. 'Mighty Wings' is angular and crushing, harnessing the sheer force that they've often been able to conjure amidst the pop frills and marrying them to some transcendental choruses and the record's most ridiculous wail. Notable is the Def Lep lighter-waver that is closer 'Conquerors', which sees moustachioed bassist and Seventies throwback Frankie Poullain take the reins on lead vocals, almost giving Hawkins the elder a run for his money.

For the most part, Last of Our Kind is stripped back – well, as stripped back as a band that once rode a giant, airborne pair of tits can get – and trimmed of a lot of the fat and fluff that have all too often made them an easy target for detractors. This time around, there probably won't be Brit Awards. Chances of multi-night arena runs are slimmer. Attempts at Eurovision won't happen, God willing. But this is the sound of a band fired-up and focused, and the result is a Darkness album to be proud of. Thumbs up.