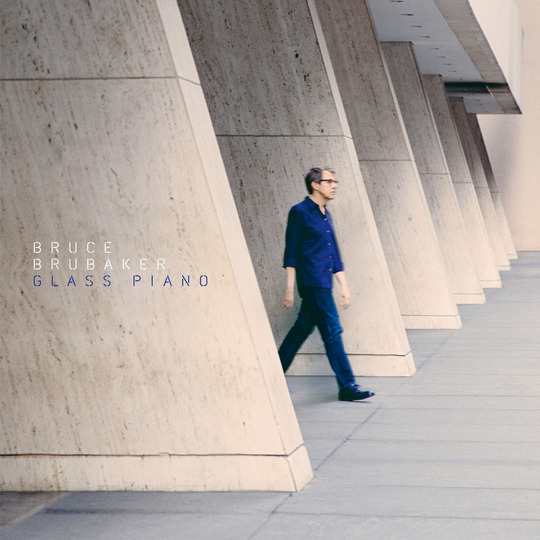 On the face of it, concert pianist Bruce Brubaker recording Philip Glass piano pieces isn't exactly a massively exciting proposition. Aside from the fact that both are close friends, Brubaker has actually recorded Glass a few times before, so the thought of another CD of some of Glass' best known works isn't going to set the world alight.

What is an interesting twist in the tale though, is the involvement of revered French electronic label InFiné - usually home to people like Rone, Downliners Sekt and Almeeva. The story goes that upon asking for a few remixes of Brubaker's earlier Glass interpretations, the two parties discussed various ideas, and eventually the American-born pianist decided to jump on a plane to France, and re-record the works entirely at a theatre in Poitiers, close to InFiné's legendary summer workshop.

The end result is Glass Piano - an hour's worth of intimately recorded solo piano from Glass' catalogue. On offer are all his better known piano pieces: 'Mad Rush', all five 'Metamorphosis' movements, 'Knee Play', and 'Wichita Vortex Sutra' - his music to the Ginsberg poem of the same name.

For the Glass fans, there's probably little new on offer here, as despite Brubaker's claim that he's re-interpreting these pieces, the changes are so subtle to be unidentifiable - there's nothing too radically different, nothing dramatically changed. However, for all it's perceived faults, this is a genuinely lovely piece of work - it's minimalist piano, performed with care by an obviously talented musician - something that's hard not to appreciate.

Brubaker's gusto is apparent from the off, and his endless passion for the works seeps through into his playing - it's scrappy, loose, and he makes it his own without taking too many liberties with the source material. There's no sheen, or big production here - it's all recorded so quietly, and so close, you can feel the timbers of the wood in his chair creek. He expands Mad Rush into nearly 17 minutes of cascading glissandos, and slows the thing to a crawl in places. He knows these works inside out, and that's very apparent when listening as a whole.

Over the hour, Brubaker twists and turns, his every move recorded on the close-mic setup so adored by Nils Frahm, et al. In fact, the Nils-alisation lends itself well to Glass, and with the current fascination of all things neo-classical/ modern composition/ whatever you want to call it, this is an interesting little addition to that world, and anyone either needing an intro to Glass' emotive, aching minimalism, or wanting to expand their horizons beyond the likes of Frahm, or Olafur Arnalds, etc. would do well to investigate.

In the wider context, it's a really lovely thing to see a label like InFiné expanding beyond the electronic tones they're best known for and shooting off into territory usually occupied by obscure classical labels. It'll be interesting to see whether they can get the kids down with Glass' bombastic intensity, but should be given ample kudos either way for giving it a shot.