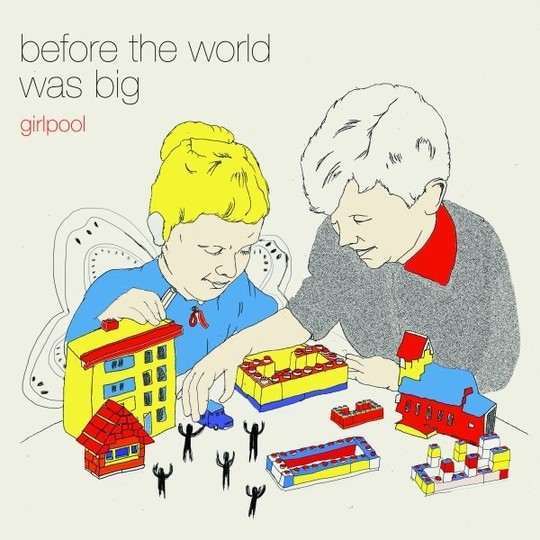 I remember the exact moment my parents left me alone at my new university halls. Surrounded by a box full of cheese graters, shower poufs and those IKEA mugs where the handles are just a bit too small to function properly, I was 18 and essentially alone in this world for the first time. As I looked around my boxed, clinical room, there was the relief of leaving the mundanity of my hometown, the excitement of stepping foot in a new city and the difficult decision whether to accept that nu-rave invitation (it was 2007, the Klaxons were still a thing).

Being thrown into the 'real world' is the best and the worst thing ever and Girlpool have personified those feelings in their debut LP Before the World was Big. Made up of Cleo Tucker and Harmony Tividad, the pair produce a wise-beyond-their years honesty, that you can still totally relate to, no matter your age. Speaking of sexuality, gender, loneliness, finding your friends – and your feet – each song is a truthful outpouring of longing and nostalgia and anger.

Their indisputable talent as lyricists means that the stripped-back instrumentation simply works to their strengths. Stand-out opener 'Ideal World' is a protest song for the internet generation, "Put me on a food stamp and a Hallmark card, tranquillise me with your ideal world" they demand; "I was taught what to believe, now I'm only certain that no one is free", expertly summing up what it's like to be entering 21st century adulthood and the pains of discovering the world through crystal-clear glasses.

Their interlocking and often messy guitar lines mimic the uncertainties and unsettling aspects of growing up and Swearin' member and producer Gilbride certainly works his magic on the finale crescendo of opener 'Ideal World' as well as the grunge-whoozy 'Crowded Stranger' and the ever-compelling, plucked, 38-second-long 'Magnifying Glass'. 'Pretty' is backed only by distorted, single keys but again, Tucker and Trividad's abilities as story-tellers will ensure you pause your current activity and just, ~listen~; "You don't have to be alone", they utter as the song fades, producing a gentle reminder that even if the world sucks, there's always an album you can plug into that will make everything that little bit better. Before the World Was Big is such an album.