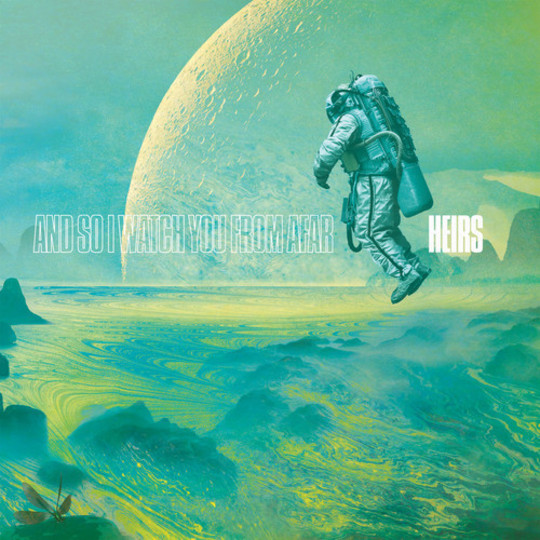 There’s something utterly joyous about math/post-rock hybrid bands at their best. No record has ever illustrated this more, in your reviewer’s humble opinion at least, than the self-titled 2009 debut from Belfast quartet And So I Watch You from Afar. Any record that starts as thunderously as that one – with the still magnificent ‘Set Guitars to Kill’ – and manages to keep up the pace and the punch – whether physical (‘TheseRIOTSareJUSTtheBEGINNING’) or emotional (‘The Voiceless’) – so perfectly throughout the rest of its duration is deserving of significant praise. That it was a debut record obviously ensured that the band leapt towards the top of the list of the most exciting young bands in the UK well before the release of 2011’s follow-up, Gangs. If anything that record was an even more exuberant listen. Just you try listening to ‘Search:Party:Animal’ or ‘Lifeproof’ without finding yourself with a great big grin on your face.

Undoubtedly the band’s run of form was seriously affected by a series of events that followed the departure of founding guitarist Tony Wright late in 2011, but 2013’s All Hail Bright Futures responded to a tumultuous couple of years with a display of colourful optimism. Out went a chunk of the distortion and the devil-may-care craziness of their first two records in favour of increasingly danceable riffs, doses of electronics and vocal loops. It would be harsh to say that it didn’t work as, in the live arena at least, the band remained as unstoppable as they were previously. The album itself, though, received a decidedly mixed reception, especially as a result of the vocals – which many deemed a distraction from the band’s merits rather than an accentuation of them.

Heirs is a follow-up built squarely on the foundations of its predecessor, which means it will largely disappoint listeners hoping for a return to the band’s heavier early records. Then again, when taken at face value, everything here is really rather great. ‘Run Home’ opens the record with a wonderful summation of all the most enjoyable aspects of All Hail Bright Futures. ‘These Secret Kings I Know’, ‘People Not Sleeping’ and ‘A Beacon, A Compass, An Anchor’ act as welcome reminders of the band’s penchant for colossal riffs, whilst ‘Wasps’ and ‘Redesigned a Million Times’ merge the two most foregrounded sides of the band’s personality as adeptly as anything else they have released to date. Although vocals are used on all these tracks – and yes, still largely in the samey and almost slightly noncommittal way they were used on the previous album – they don’t detract from the songs at all.

As the record progresses, however, it’s hard not to feel that the band are using the same tricks over and over again. This not only makes the second half of the record intrinsically less vibrant on first listen than the first but also undermines earlier tracks on repeat listens. ‘Animal Ghosts’, for example, whilst arguably boasting some of the most pleasing guitar work on the record, feels like a redux of ‘Wasps’, except with added horns to augment the nondescript background vocals. Similar tales can be told with ‘These Secret Kings I Know’ and ‘Fucking Lifer’ or ‘A Beacon, A Compass, An Anchor’ and the title track. In short, whilst everything on Heirs sounds pretty good, it also sounds a little uniform. There’s nothing wrong with a record having a unified sound, and with elements bleeding between tracks, but this seems to have occurred too much on Heirs, with the result that everything rather merges into one, ultimately rather forgettable, whole.

The irony of this is that, by the closing duo of ‘Heirs’ and ‘Tryer, You’, And So I Watch You from Afar have actually found themselves closer than ever to clarifying their current approach. Muscular, melodic, accessible and yet thoughtful, these two tracks demonstrate the quartet’s noteworthy abilities as well as anything the band have done to date. It’s just a shame that they round off a record that is rendered bafflingly unmemorable by its repeated use of similar musical elements that, whilst often estimable, eventually begin to feel somewhat shorn of their individual musical character.