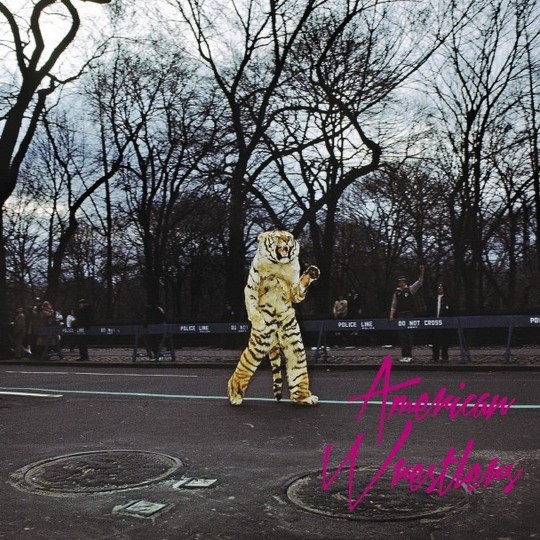 If you think about it for long enough, it seems improbable and amazing that any song ever gets written. It starts as nothing until you come up with something; a hook you can’t get out of your head, a turn of phrase that might sound quite good with a beat. A riff you can just about convince your fingers to pull off as long as no one is actually listening when you do it. And slowly, painfully, you create something from the nothing you started with.

American Wrestlers’ self-titled album is a fine example of making nothing into something. A man alone with nothing but a handful of pawn-shop instruments, a drum machine app and an old eight-track. A hook he can’t get out of his head, a turn of phrase that might sound quite good with a beat. A bandcamp account. And from it comes a record that’s a strange, echoey piece of pop culture that seems out of place in time and space.

For a while, no one knew who American Wrestlers were - all we had to go on were two songs featuring hooks that get stuck in your head and some turns of phrase that sound really good with a beat. ‘Kelly’ and ‘I Can Do No Wrong’ landed in journalists’ inboxes with little-to-no back story - whether by accident or design, it seems weirdly fitting that the warped Americana of the album American Wrestlers by the band American Wrestlers was conjured into existence by a lone Scotsman. Gary McClure, previously of Working For a Nuclear Free City and Gary McClure semi-fame, moved to Missouri for love, got a job in a factory and made an album by himself.

None of the songs on the album are super complicated and that gives it an air of ease. McClure started with simple chords, simple drum beats, simple melodies and layered them over themselves; add in the under-produced nature of eight-track recording and you’ve got something that oscillates between the weirdness of Unknown Mortal Orchestra and the intelli-pop of bands like Phoenix and even Vampire Weekend, if you do the aural equivalent of squinting a bit.

Although there’s a vogue for the vintage production techniques and comfortable imperfect noisiness that pervades the record, it doesn’t always do American Wrestlers justice. The lo-fi production and clipped electronic drums don’t sound too bad in isolation but the songs don’t sit too well in a compilation playlist; if you switch between this record and pretty much any other track released in the last few years, you’re instantly aware of how canned and empty it can feel. There’s an unfinished air to tracks like ‘Cheapshot’, like you’re listening in on a band practice rather than seeing them at a gig.

That’s not to say there aren’t some killer tracks - the aforementioned ‘Kelly’ is an unlikely lead single that you’re half expecting to be a love song but is actually about a homeless man who was beaten to death by police, and there’s a dead-eyed charm to ‘There’s No One Crying Over Me Either’, a strangely reassuring reminder that we’re all deeply alone together. While some tracks, like the ghostly ‘Wild Yonder; with its choral harmonies, feel less sparse, in some places it feels very obvious that McClure was working alone and could perhaps have done with someone to say, 'Hey, buddy, let’s wrap this up maybe?' ‘Holy’ is the worst offender - it feels like it drags on for six years not six minutes.

The final song on the album, ‘Left’, disappears into itself and takes the album with it. Nothing but a quiet beat and some distant guitar strums, McClure singing like he’s just humming to himself, trying to sort things out in his own head. And then it drifts away back into the nothing it came from.