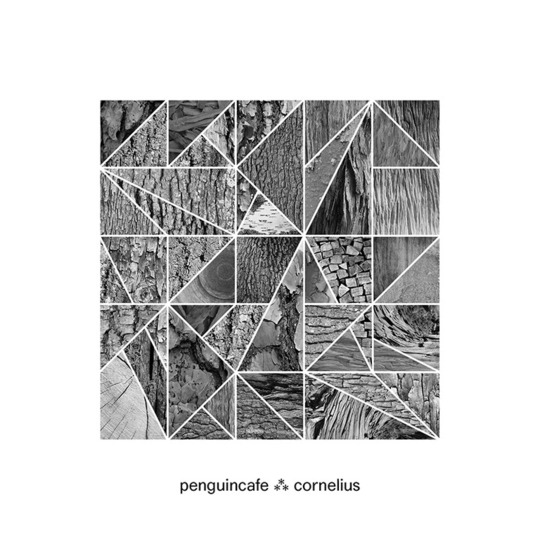 At first glance, I knew this would be a great combo - the hyperactive glitch kitsch of Keigo Oyamada's Cornelius project, married to the lilting lo-fi folk of Penguin Cafe - what's not to like?

Well, far from what I thought I was getting myself into with this, they've actually combined to create completely the opposite of what I imagined it'd be. I pictured a million instruments all playing at once, cut up glitched guitars bouncing all over the place, and madcap percussion pinging across the speakers.

What they've actually delivered is a beautifully languid exploration of melancholic piano and stately strings - think more Nils Frahm, Dustin O' Halloran, Jóhann Jóhannsson, Sylvain Chaveau etc. It's wonderful stuff, and sees Penguin Cafe's influence perhaps a little more up-front than Oyamada's, but his own idiosyncrasies do manage to melt through into the overall feel of the record eventually.

Across the four tracks on the EP, you get Cornelius remixing Penguin Cafe's recent single 'Solaris', Penguin Cafe retooling Cornelius' 'Bird Watching At Inner Forest' from his 2001 album Point, and two collaborative tracks: 'Close Encounter' and 'Track of the Dull Sun'. Remix swaps can be quite hit and miss affairs, so including two on this EP rang my 'struggling to find content' alarm bells - would this just be two tracks of any old shit to flesh out a single into an EP? Thankfully no - they're at home as much here as the collaborative tracks, and actually serve as a nice reminder as to both acts' strengths. Neither stray too far from the source material, so perhaps aren't the most revolutionary remixes in the world, but serve their purpose well by creating a cohesion for the rest of the EP.

Subtle elements of percussion also float along into the mix too, just enough to keep everything moving - it's a world away from the intense math rock time signatures Cornelius made his name from, so if you're expecting another 'Freefall', 'Gum' or 'Point of View Point', you may be disappointed. I guess he's always had a soft side though, as the original 'Bird Watching At Inner Forest' will attest to, so perhaps he's channeling that side of his character more. Whatever, it works.

The main event, so to speak, are the two collabs on offer. 'Close Encounter' sees the pair in plaintive mood, all glistening pianos dancing across a bed of melancholic strings, which ease and lift with a subtle grace. 'Track of the Dull Sun', however, sees a darker, more sombre side emerge - with thunderous pianos, and screeching violins, it brings to mind the more epic pieces on Clint Mansell's 'Moon' soundtrack amongst others.

It's an impressive musical snapshot, and works well as an introduction into this world they've both gloriously crafted, but at just under 18 minutes in total, it's brutally short. Apparently an album is coming early next year, so until then, you'll just have to make do with these four beautiful little things.