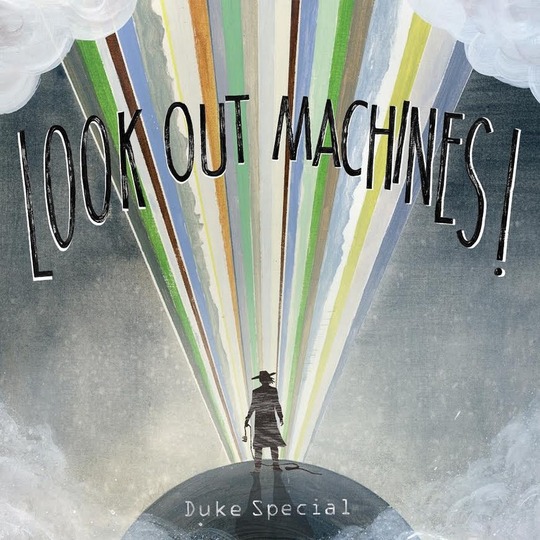 Northern Ireland’s Peter Wilson, aka Duke Special returns with his fourth studio album, though it feels like there’s been more: in a 13-year career that has seen him dabble in a multitude of media and a plethora of projects (I think he’d approve of the alliteration) the Belfast-born multi-instrumentalist has always had a flair for imaginative, interesting and often dramatic music. In his ability to channel drama and heightened emotional states he’s always fallen somewhere between Amanda Palmer, Patrick Wolf and Rufus Wainright, but with a lightness of touch and a storytelling knack that meant he had more in common with Tim Minchin than dreadlocks and eyeliner. Wilson is, in short, a prestigious talent, and the kind of performer you’re glad is out there in the world, striking blows for art.

Which is why Look Out Machines! is such a disappointment. In a lesser artist you’d be impressed by the storytelling on show here, you’d be very impressed by the lyrics, and you’d find the light electronic beds that supported them palatable enough; but in an act with so much heart and drama in their past, this falls way short of the mark.

The problem is one of depth. ‘Wingman’ opens with a promising, fuzzy, pulsing beat but its chorus is lost in a weak, sub-Coldplay mush. ‘Elephant Graveyard’ and ‘Step to the Magical’ aim for the same sonic pop territory as Patrick Wolf’s The Bachelor, but lack any of the bite and bitterness of that record. They have more in common with the insipid hairdresser pop of Mika or the recent Take That album. The result is an album with a touch that is simply too light to support its ideas.

Which is a shame, because the intention was a good one. Lyrically this is amongst the most personal Wilson has been - he’s present in the first person throughout, and renders himself admirably naked. The problem is that, perhaps intentionally, he has swung the other way musically - there is less feeling, less personality, less drama in this music, which does a set of beautiful poetry a disservice. A man known for heart-rendering piano performances is hiding his musical heart behind some sadly flaccid electronica. When he sings “I have stood here for so long they’ll put a statue where I’ve been.” on ‘Statues’ you have to disagree- we’ve not been standing here very long at all. It just feels like we have.

There are moments of promise - ‘Son Of the Left Hand’ is endearingly mad, with big boomy toms joining a compelling wibbly beat, and ‘Nail On The Head’ has a great time with its clockwork electronica. As the album draws on Wilson starts to tone down his pop instincts- the final tracks are stripped down to piano, and that soulful Duke Special voice soars and swells a little more. The slithering strings of ‘Domino’ slide us home with some hope for the future, but wishing the previous half an hour wasn’t slipping out of our heads so maddeningly quickly.