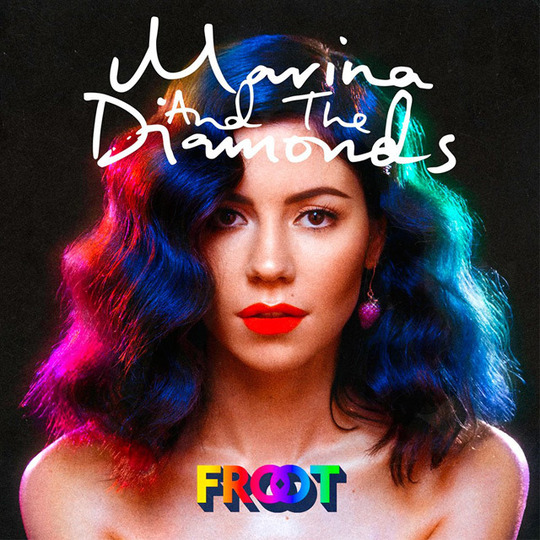 In a number of ways, Marina & the Diamonds' third album sounds like a fresh start. Marina Diamandis toured the living hell out of Electra Heart, both this record's predecessor and the name of the pop star character she'd created to go along with it, before killing her off and going into hiding for six months, in a manner of speaking. She'd done her time as Electra, who had been an extension of herself as much as anything else. That character's very public death could also have signalled the end of Diamandis's career, such was the suddenness of how she'd retreated from the spotlight. Had she been broken by fame? Hardly: she was just getting started. The seeds of her Froot had long since been planted, and even while on the promo trail for Electra Heart, she was already thinking of what came next. I wouldn't be at all surprised if she had potential fourth-album tracks already in various stages of completion.

To free herself from her musical past, Electra wasn't the only one who had to go - all of her co-writers did too. Froot was penned in its entirety by Diamandis herself, and she was much more selective when it came to outside help. Co-producing with David Kosten, she got members of Everything Everything and The Cure in as her backing band. Everything about her third album's background could lead one to expect a defiant opening, but it begins instead with plaintive piano and Diamandis's unique vocals, starting on a high with the hymn of self-acceptance that is 'Happy', which essentially catches the listener up with what she's been doing: learning to be comfortable with herself. 'Learning to be happy' would be a strong way of putting it (even though she does that herself in the chorus) - this is an album with many ups and downs, albeit only in the sense that, as usual, a variety of emotions and states of being are explored. In the past, her albums were structured in a way that led some to accuse her of favouring concept over consistency, but Froot is, pound for pound, comfortably the strongest collection of songs she has put together thus far.

The album isn't without its conceptual trappings, though - half of the record deals with a relationship she had to end. Pop songs written with relationships in mind are usually from the perspective of the spurned, and rarely the spurner; this makes the likes of 'I'm A Ruin' and 'Blue' all the more powerful, with the former ranking among the most anthemic tracks she's written to date ("I've tried to say, 'Babe, I'm gonna ruin you if you let me stay' / You still mean everything to me, but I want to be free"), while the latter deals with the immediate aftermath of the breakup with the sort of contrast Diamandis has come to perfect. (Remember how dark The Family Jewels became once you looked at the lyric sheet?) Incisive keyboard hook? Check. Vocals hitting operatic heights? Check. Chorus so big you could see it from space? Double check.

There's confidence running through every note of this record, and how could there not be? This is most definitely Version 2.0 of Marina & the Diamonds. She's even written a song about how trying to pigeonhole her is futile ("You think I am one thing, but I am another / You can't call my bluff: time to back off, motherfucker!" - 'Can't Pin Me Down'). With the pop landscape becoming increasingly homogeneous, more artists need to experiment, and the variety displayed across Froot's 12 tracks is impressive. Would the Marina of 2010 have gotten away with the funk overtones of the album's title track? Probably not - besides, she was different then, both musically and artistically speaking. She may have tackled similar themes before - human nature and mortality are explored on closing pair 'Savages' and 'Immortal', and she's no stranger to those topics - but never quite like this. Diamandis has never been coy about her ambitions, but she's taken huge strides toward even greater achievement, and all it took was the confidence to set out on her own. Two years ago, it looked like her career was over, but with her triumphant third album, she's set to go places she could previously only dream of.