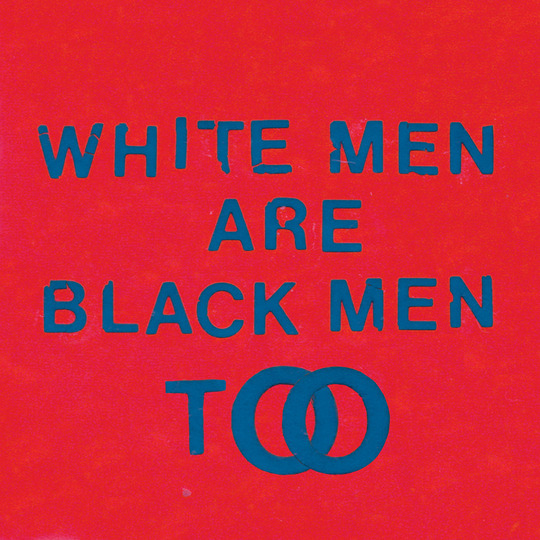 What do Young Fathers mean to you? Chances are, you’re right. Out-there experimentalists who will never cede to your wishes? Yeah, I guess. Soul-pop anarchists who’ll lure you in with a great melody before abruptly jutting out at cubist angles? Definitely. Restless polemicists with enough of a vision that it could be clumsily labelled ‘an agenda?’ Sure, why not.

For me, Young Fathers are a punk band – not that anyone can tell me what punk is anymore. Actually, maybe that helps. Uncompromising, insular and relentless, they breathe rarefied air as a collective who will never release something with which they are not truly satisfied.

White Men are Black Men Too is a punk title, as well. Not in the lazily provocative way that stirs up the ranks of the Internet’s professionally offended, but in the way that forces you to pay attention and deal with what is actually happening in front of you. When they use The N Word on this record, it’s not to give an easy nod to the gangsterism of their rap forefathers, but to enforce that, despite our claims to evolution, this hateful word is still in use and has lost none of its sickening power.

It’s impossible to remove race from the equation here, but that’s how this record has been constructed. As Alloysious Massaquoi spat in his email that forms part of the press release, 'it's got issues of race and so what? Why should alarm bells start ringing, even though in general conversations race, politics, sex and religion are always the subject matter? Why should it be discussed behind closed doors and never confronted head on? How do we help tackle one of the biggest hindrances in people's lives and the world… by not putting the question forward and not letting people debate positively or negatively about the statement?'

Despite the weight of their subject matter, Young Fathers are too careful to let it overwhelm their music. They understand that you’ll need a way in. This is the best thing they’ve released, and I have no caveats to insert after that statement. ‘Shame’ is the fucked-up younger brother of Outkast’s ‘Hey Ya,’ and the most summery-sounding song ever to feature the word ‘cunt.’ ‘Dare Me’ begins with the most beautiful tune yet to escape their clutches, and you’re thinking that it could be a monstrous hit until you’re plunged into a nightmare world last inhabited by Gazelle Twin. You’re scared and impressed all at the same time – smiling on the outside but resolving to keep your guard up until the LP is over. Also, I’m absolutely convinced that ‘Rain or Shine’ is what The Specials would sound like if they emerged today. As a final trick, what should be the record’s smooth, shimmering climax on ‘Get Started’ is made unruly and sinister by a horrendously out-of-tune piano.

Like DEAD before it, White Men… is an elusive beast. It’s more immediate, more instantly gratifying and more technically proficient, but there are also dark, difficult corners which hint at hidden terror. Little details emerge from the fog each time you put it on, and it’s impossible to keep it confined to the background. The beats are closer to krautrock than hip-hop and everything is just that little bit too loud, regardless of the volume at which it’s played. One suspects this may be intentional.

When I first became aware of Young Fathers somewhere around TAPE TWO, my hope was that they might someday become as successfully subversive as Anti-Pop Consortium. They have long surpassed that optimistic proclamation to the extent that I now feel faintly ridiculous for even considering it. So I’ll ask you again: what do Young Fathers mean to you? Chances are, you’re wrong.