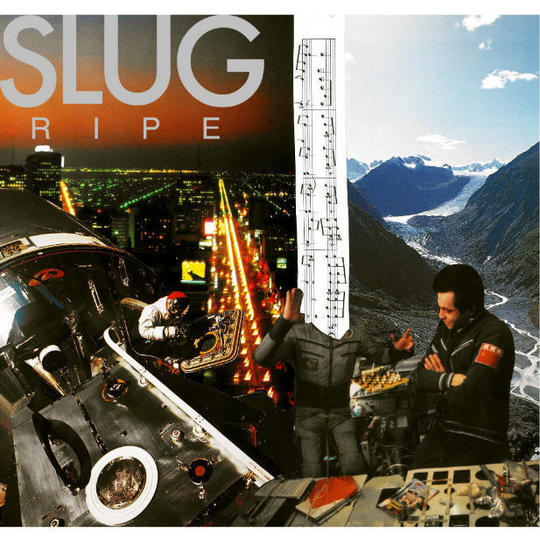 Slug is a project which has been a long time in the making. Its primary protagonist Ian Black served his time with underappreciated North East surf-pop loons The Bubble Project, before a year as a touring member of Field Music gave him the inspiration to take on his own project. The four years which followed this stint were spent gradually compiling the songs which would eventually become Ripe once Black had taken Rhys Patterson and fellow Field Music alum Andrew Lowther into Peter and David Brewis’ Sunderland studio to finally commit his work to tape.

For an album with such a lengthy gestation period, Ripe sounds remarkably spontaneous. There’s nothing to suggest that these songs were the subject of nearly half a decade of painstaking self-editing. Indeed, it actually feels more like the result of a creative dirty weekend, as though a few musicians have gone into a studio for a couple of days, frantically throwing down as many ideas as possible before their time runs out.

It’s fairly clear from listening to Ripe that Black has picked up a trick or two from the Brewis brothers down the years, and if you’re familiar with the Field Music discography, you’ll quite possibly detect traces of their influence. However, the sheer diversity of the album is unlike anything that any of the personnel involved have produced in years gone by, and suggests that the lifeblood of identity which courses through the veins of RIPE belongs to nobody but Ian Black.

The album’s first single ‘Cockeyed Rabbit Wrapped in Plastic’ sums up Ripe as much as any single song possibly could. It’s an agitated, urgent piece of pop which somehow manages to be as rangy and meandering as it is lean and concise. His ability to fit a million ideas into a song without making it feel bloated or over-cooked is probably Black’s greatest strength, which is exemplified on ‘Running To Get Past Your Heart’. It’s an odyssey of funk-pop which wanders off in half a dozen different directions, but somehow it’s over less than two and a half minutes after it has started.

The twists and turns in the tracklisting are a recurring theme of Ripe, contributing much to its richness as an LP. Indeed, the aforementioned ‘Running To Get Past Your Heart’ is flanked by two utter curveballs. It’s preceded by an unexpected bit of steel drum-laden noodling in ‘Weight of Violence’, and followed by ‘Peng Peng’, a stunningly expansive instrumental which is as sad as it is cinematic. Elsewhere, he nails his attempt at Prince-esque filth-pop in Greasy Mind, a song with positively oozes a subversive and irresistible sex appeal.

To attempt an album as diverse and ambitious as Ripe suggests huge confidence on the part of a band. To actually pull it off, though, and refine such a disparate stew of ideas into a cohesive pop album is a rare thing indeed. Slug have undoubtedly hit the mark at the first time of asking because Ripe is one of the most unabashedly joyous and invigorating albums to have appeared in years. It’s a creative tour de force which marks the arrival of a new pop maverick.