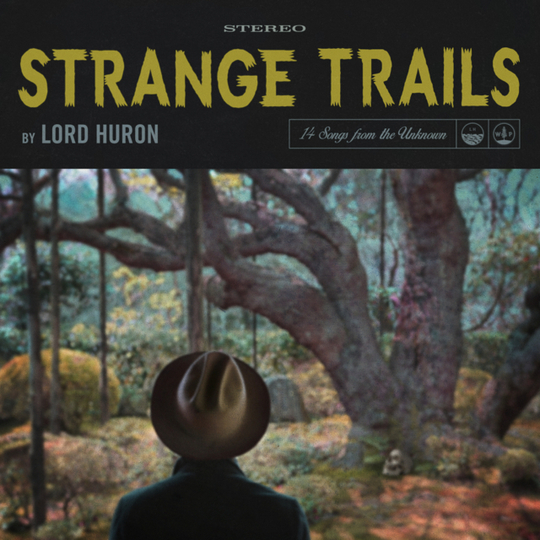 Strange Trails’ cover is styled as the kind of retro adventure novel now to be found sodden with nostalgic dust in charity shops and yellowing in a quiet cubby at your grandma’s house. From then on, it doesn’t take long to twig that this aesthetic has an influence on Lord Huron that runs far more than skin deep. Instead, this image casts the first stone into a pool of memories, shared and invented, creating ripples that spread throughout the entire record.

It’s a rich vein to mine: song titles read like a collection of pulpy short stories ('Dead Man’s Hand’, ‘The World Ender’, ‘The Yawning Grave’ or ‘Cursed’); Ben Schneider’s voice has a lonesome, emotive twang that casts him as both narrator and heroic eternal lost soul, and the production makes liberal use of reverb to give a sense of wistful timelessness, tying songs together like a book’s binding.

Appropriately, the defining feature of the band’s sound is that it’s dripping with a wealth of Americana, a collage of folk, rockabilly and rock (with and without the roll) that contentedly dips into reference points both contemporary and historic. Even their odd dip into atmospherics and layers of instrumentation from further afield ‘Meet Me In The Woods’ and ‘Way Out There’, feels fitting to that distinctive pioneering yet conservative American spirit.


The band ensure they make music, which matches their aesthetic: airy, welcoming story-telling indie folk, which just happens to be painstakingly well considered and recorded. Ultimately though, where all this world building and curatorship comes to fall short is where it matters most: the songs.

The dominance of the aesthetic tends to mean that the big ideas have been expended elsewhere, and whilst not exactly weighed down by déjà vu, there’s a certain expectedness to the moves the band make musically. ‘Until the Night Turns’ kick-starts the record with a rollicking hoedown, a frontier vibe and distinctive American gallop carries ‘La Belle Fleur Sauvage’, there’s a neat Spaghetti Western meets Link Wray edge to ‘The World Ender’, a charming mixture of exuberance & delicacy on ‘Fool for Love’ and a serviceable The National B-side feel (no bad thing) to the ‘Frozen Pines’.

All are eminently listenable moments and equally, this isn’t to say that Huron are lacking in songwriting smarts. In particular there’s a confidence to ‘Hurricane’, which makes the utmost of its individual elements - a catchy lead guitar line, handclaps, rhythm strum, basslines, echoing kick drum – to ensure the whole is greater. Each element is held comfortably apart and then steadily dropped in at the prime moment so that they merge confidently together building the song’s momentum. When they nail it live it must sound ace.

Instead, the issue is that when you reach the end of Strange Trails, you feel as if the trails weren’t really all that strange and that you haven’t been even a tenth as adventurous as the record first promises. It’s as if the band, having gone to all the effort of building the car from scratch, painting it Technicolor and made the perfect mixtape for their road trip, half-filled the tank and left the wheels uninflated.