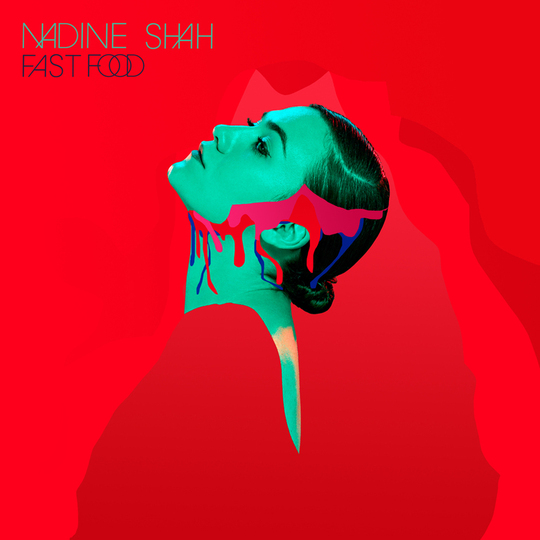 The recent spectacle of BBC 6Music Festival on Tyneside saw the most exciting collection of artists to converge on the North East of England in recent memory. The weekend was a triumph, with unforgettable sets from the likes of Sleater-Kinney, Django Django and Mogwai among the main highlights. As it turned out, though, the artist who really stole the show was someone from just down the coast in Whitburn who wasn’t even on the original line-up. Nadine Shah stepped in as a late replacement for an unwell Jon Hopkins and the magnificent performance in The Sage Hall 2 which saw her preview of second album Fast Food feel like a big deal, the coming of age of an artist who had been ‘one to watch’ for a number of years.

Of course, Shah’s impact on the festival shouldn’t really have been a terribly big surprise to anyone already familiar with the bewitching power of her songs. The poised delivery of her debut Love Your Dum and Mad in 2013 caught many off-guard, and hinted that we just might have a pretty special artist on our hands. Ever since then, she seems to have been constantly on the road honing her craft and growing the troupe of devotees she’s been quietly amassing like some kind of gothic Pied Piper.

One of the first things to strike you about Fast Food in comparison to her debut is that she seems to have developed a sense of focus which wasn’t always necessarily evident previously. There’s a deliciously gloomy cloud which enshrouds every song here and means that Fast Food is not only an impressively coherent record, but it’s also a thoroughly immersive experience. It’s very easy to be sucked into Nadine’s world by the dark, brooding tales she weaves here, even if the directness and intimacy of her words can make you feel just a little voyeuristic at times.

Much is made of the sheer power of Shah’s voice, but it’s also a hugely versatile tool which she employs here with a masterful restraint. There’s a lot to be said for the lightness of touch from producer Ben Hillier in facilitating this, freeing her to so effectively portray such a wide spectrum of emotions. Like Shah, he has a strong grasp of the power of simplicity and this makes for a number of Fast Food’s most powerful moments. ‘Divided’ for example, is one of the most affecting songs here, with the arrangement as naked as Shah’s delivery and lyrics: “My love, it was divided / Between his cheekbones and his knees… I let my hair loose for you / But I would scrape it back as soon as I would leave”.

Throughout Fast Food, there’s a strong sense of the songs having the space to breathe and develop at their own pace. ‘Big Hands’ and the hypnotically gorgeous ‘Nothing Else to Do’, for instance, both build from fragile origins to gently majestic finales. These moments are wonderful, but perhaps the greatest triumphs on this album are when Shah indulges her deceptively sharp pop nous. ‘Stealing Cars’, for example is full of hooks from the moment she opens her mouth. ‘Fool’, meanwhile is driven by irresistible shards of Interpol-esque guitar and casts Shah as the chief assailant in a deliciously spiteful (if tongue in cheek) taunting of a predictable, pretentious Cave and Kerouac obsessive. It’s a fantastic piece of work, and one of the strongest singles to have been released so far this year.

If Love Your Dum and Mad floated the idea that Nadine Shah was capable of greatness, then Fast Food confirms this as fact. The songs on this record have been delivered with the kind of aplomb that only someone with an unshakeable confidence in their work can muster, which suggests that Nadine Shah’s artistic future is mouthwatering. Perhaps that’s a discussion for another day though, and we should probably just savour what she’s doing right now. One thing’s sure, though, Nadine Shah is no longer ‘one to watch for the future’, but a bona fide creative force in the here and now.