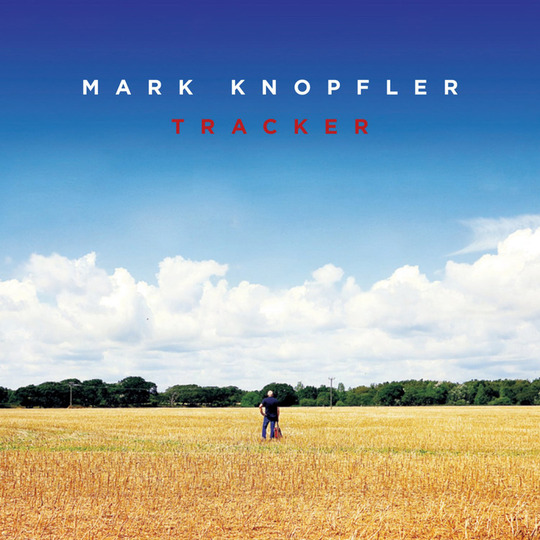 Dire Straits were big. Stadium big, big on that MTV, big on headbands and padded suits –aesthetically Eighties but yet more enduring and endearing than Nik Kershaw. To the music and guitar cognoscenti Mark Knopfler has always been held in high esteem; a finessed finger-picker, witty balladeer, reluctant pop star and a country wise man – a bloody good Jack of all trades basically.

With a greatest hits of ‘Sultans of Swing’, ‘Money for Nothing’, ‘Romeo and Juliet’ and ‘Brothers in Arms’ you have to wonder how Knopfler stays so humble. Perhaps it’s due to the company he keeps – when you’re fingerpicking with Chet Atkins and singing with Emmylou Harris it’s hard to be braggadocios, even if you did write ‘Walk of Life’. Namedropping aside, Knopfler is a rare survivor from that period of excess; an icon whose honesty and integrity is what has made his previous seven solo albums such a joy.

Tracker opens in typical Knopfler dialect with ‘Laughs and Jokes and Drinks and Smokes’. Low whistles permeate the song whilst strings, acoustic and brushes offsetting the distinctive low grumble that’s epitomises Knopfler’s restrained approach to vocals. His greatest ability lies in his effortless talent to form epics from the minor moments of happiness and content that occur on a daily basis and seldom make it to song format.


Knopfler says: 'The album title Tracker arrived out of me trying to find my way over the decades. Out of me tracking time - looking at people, places and things from my past, and out of the process of tracking as in recording tracks in the studio.'

And that’s very indicative towards the feel of the songs here. A promotional video shows Knopfler recording a slide guitar part in age-old fashion before shutting the lid of his Mac and returning to the outdoors. Tracker is seamless in both embracing technology and adapting it; recreating the intimacy of personal experiences within the confines of an uncluttered, contemporary folk backdrop.

‘Rivertowns’ ambles pleasantly and oozes working class humility throughout “it ain’t the life of Riley, but it’s keeping me afloat”. There are inevitably echoes of Dire Straits throughout, most obviously on ‘Beryl’ – given the wry and real tales and as such it’s no surprise to find that the work of the late Beryl Bainbridge finds a home on this track. The plucked guitar intro has the evocative atmosphere of famous works like ‘Telegraph Road’ – like Dave Gilmour, Knopfler is one of the few guitarists who can be identified from a single note.

Tracker seems like Mark Knopfler at his most personal and yet the furthest away from stardom. By celebrating the life of late bloomers – critically speaking – like Bainbridge, he is affirming his place as a song writing nomad who’s writing is enabled as and when the inspiration takes him. Still adorned in his best brown baggies and platform soles, Knopfler can still make the guitar cry and sing without airs and graces.