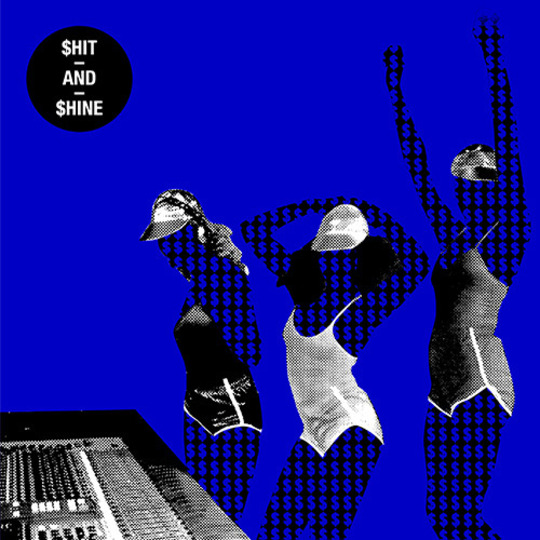 There’s no other band working today for whom the words ‘post-everything’ ring quite as true as they do for Shit & Shine. They’ve traversed uncharted plains between noise rock, outright digital abstraction, and pop-like tropes, shifting from non-sequitur to non-sequitur, donning blue face makeup and rabbit masks, and yelling rambled nonsense over drum rhythms repeated for half an hour at a time before breaking into haphazardly assembled concrete pop. They’re utterly unlike anything else, but only by being sort of like everything else all at once. I was lucky enough to be in the small crowd observing Shit & Shine’s gig in a subterranean cave at Elevate Festival in Graz, Austria last October. Craig Clouse - the sole consistent member in the ever-shifting lineup - was joined on stage by a drummer and vocalist to unleash seemingly random yelps and guitar noise into auto tuning pedals, all over the top of a four-to-the-floor beat for some 25 minutes. The crowd went from excited to confused to excited, to almost angry… But that’s just how this band works: always expect the unexpected from Shit & Shine. On that note, we move on to the latest full album from Clouse and co, put out by the always reliable Rocket Recordings (home to Goat amongst others). The catchily titled 54-Synth-Brass 38 Metal Guitar 65 Cathedral.

Locked groove rock ‘n roll has become the default setting for underground guitar bands of late. Ever since kids started Googling ‘Neu!’ and ‘krautrock’, metronomic repetitious rhythm has become almost omnipresent. Even the latest transmission from the Aphex Twin, Computer Controlled Acoustic Instruments pt2 seems to signal a new and increasingly ‘motorik’ direction. Bristolian Rocket Recordings has in fact been home to some of the best works in the ‘neo-kraut’ subgenre - Gnod’s Chaudelande and Hills’ Master Sleeps to name two - so Shit & Shine’s groove-heavy jams are right at home here. Truth be told though, Clouse & friends operate in a different astral sphere entirely. Shit & Shine’s penchant for repetition has never had the clean swagger of the kraut-influenced psych-rockers, tuning snare drums to crisp perfection and cleanly plucking bass guitars with mass-produced precision. The scrappy percussive acid soundscapes of legendary weirdo rockers (and fellow Texans) Butthole Surfers is more Shit & Shine’s thing. Butthole Surfer’s long-serving percussionist King Coffey has even jammed with Shit & Shine on more than one occasion (he could even be present on 54-Synth-Brass for all we know, but it’s anybody’s guess). The anything goes acid-soaked madness of Butthole Surfers’ Locust Abortion Technician is one of the few truly apt reference points available to any budding writer out to describe the indescribable, and summarise the clatter of Shit & Shine. That album saw chipmunk vocals over thrash metal drum fills, riffs nabbed directly from Black Sabbath bookending surreal passages of random rock opera frills, Thai pop music loops cut-and-paste Burroughs-style and most importantly persistent drum rhythms underneath the sound of a chaotic rock band on a severely strange acid trip. It’s very much in this vein that we find the blue-faced creatures of Shit & Shine this time around.


While much of 54-Synth-Brass 38 Metal Guitar 65 Cathedral’s aesthetic feels closer to far-reaching rock music than the electronic or jazzy tropes Shit & Shine have toyed with in the past, there’s massively wide variety to be found deep in the album - just check out the funky groove on ‘Love Your Hair–Hope You Win!’, or the jazzy tinkling on ‘Writing Poetry On Your Forehead With The Tip Of A Hunting Knife’. As on their album Powder Horn, which came out last year via Powell’s Diagonal label. the disparate styles are all strewn together with Shit & Shine’s unique brand of bizarre logic, ultimately coming across as fluid, organic and somehow totally natural. Skittered drum machines make up the beating heart of ten minute closer, ‘Egg Mm-Mufin/ Pimp Different’, which goes on to incorporate glitching sound effects, squeaky field recorded machinery, scatter horror movie bowed cymbals and murky bass rumblings. It should come across as a malevolent, almost chilling coda to an album of energetic fun loving freneticism - especially in contrast to snappier tracks like ‘Goat $Hit’ and ‘Cowboy Hat’, which hinted at the most playful sort of experimentalism earlier in the album - but Shit & Shine’s humour never fails to shine light on even the murkiest jams.

Humour aside though, when you’re lost in one of the band’s ten minute looping wig outs, such as the gnarly guitar-heavy opening track here, ‘Electric Pony 2’, the real brilliance of Shit & Shine comes into sharp focus. There’s not much too it, but then again there’s so much of it to get lost in. King Coffey himself put it aptly in conversation about drumming with Shit & Shine over at the Rocket Recordings blog:

“It’s taught me the value of repetition as liberation. It might be the same loop, but your brain begins to sense new aspects, as the sound practically morphs before you.”

Let the music do the work. All you need is a drum beat, a bass line, a handful of musical toys, and the sheer will to just let anything happen. Shit & Shine have mastered the art, and 54-Synth-Brass 38 Metal Guitar 65 Cathedral sees them at a new high point. Experimentalism really isn’t supposed to be this much fun.