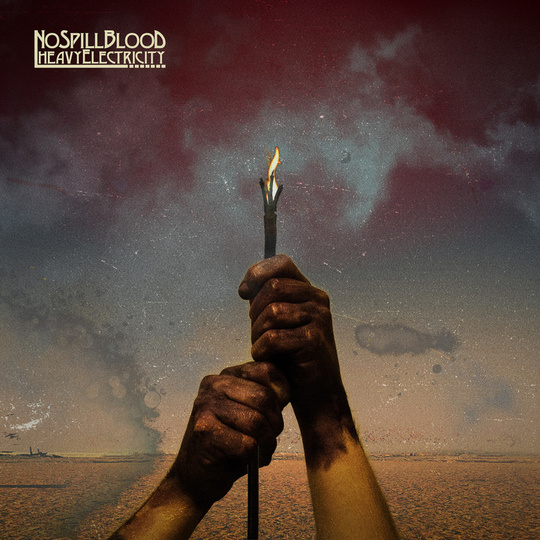 There's an old-school horror film tension about No Spill Blood's full-length debut. At times, it evokes the dread of Goblin's score from Dario Argento's Suspiria and the synth mastery of John Carpenter. Heavy Electricity isn't about homage or emulation, however. Key to this specific sense of place is the atmosphere created by the progressive metal trio. Producers often talk of wanting a record to sound like a bunch of people playing in one room together. The Dublin outfit make good on that idea but here you're in the room with them.

Dark and claustrophobic, it breathes, pulsating and shifting with each new movement. You can leave but the band follow, always on your heels, armed with hooks. The first one shoots out, Hellraiser-style, after less than a minute; Matt Hedigan's distorted bass - regularly shredded like a six or seven-string guitar, though none appear on the record nor are they missed - leading the macabre charge. It is his voice, his guttural roar, that will act as both chasing monster and unyielding constant. Paired up with Lar Kaye (who has left both this project and Adebisi Shank behind for All Tvvins) and his percussive power, Hedigan's declarations take on the timbre of a dystopian propaganda rally. Add in Ruadhan O'Meara's cosmic synth leanings and it's all rather dizzyingly brutal.


'White Out' may only take a matter of seconds to ensnare you but from then on it delights in patiently tying the listener up in knots, its traditional genre kick-in all the more effective as a result. It's a labyrinth all of its own, one of many dotted throughout Heavy Electricity's haunted house. Like any good fright maze, jolts are in plentiful supply. 'White Out' gives you another couple of minutes after going for the kill, upping the deranged ante. 'Back To The Earth' drops the pace but keeps the stakes, building with the knowing feeling of a hero/villain showdown. 'Now II' stretches that paranoid thread, the synth lines giddier and more sinister now, Hedigan gleefully relishing the bit between his teeth.

It's a curious mix, all this, but then not every record sets out on "an elemental pilgrimage emerging from the bowels of the earth, only to encounter savage environments, altered states, and the brutal inhumanity of fellow men." That's quite a lot to shoot for and, sure enough, the journey has the odd misstep or two. The likes of 'El Duurto' and the title track are fine in their own right but feel a little lightweight in this narrative. Either side, 'Harsh Route' conjures up the record's most successful realisation, bouncing from twisted merry-go-round keys to a whiplash cacophony, the walls alternately expanding and closing in.

Sometimes, the house that No Spill Blood built throws too many doors open, the maze becoming ponderous. Four minutes can feel like double that amount and exhaustion creeps in around the closing stages. 'Thinner', in particular, feels a touch rote and a tad safe. As the exasperated howls that come crashing down repeatedly in the middle of 'Sweet Beans' attest to; Heavy Electricity and its keepers are at their terrifying best when they leave no place to hide.