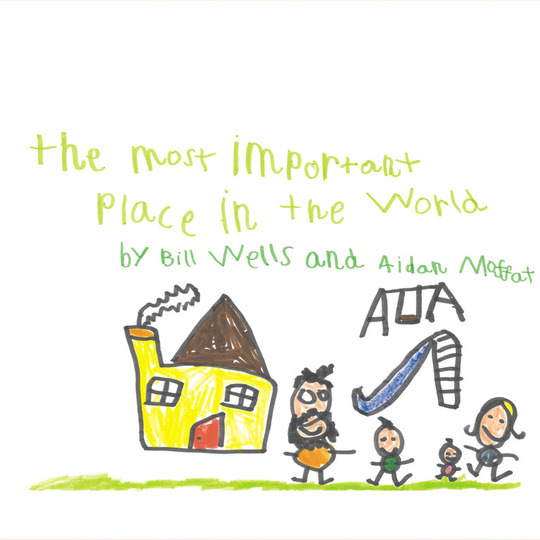 Few would disagree with the assertion that, on their 2011 collaborative debut Everything’s Getting Older, Bill Wells and Aidan Moffat sounded like they were born to work together. The former’s subtle, but impressively varied, compositions were a perfect fit for the latter’s restless, distinctively embittered words and voice. Most importantly of all, the album displayed a kind of elegiac beauty that perfectly fitted its title and, on the record’s most powerful moments, made it deeply affecting.

Little is overwhelmingly different this time around. Wells’s piano is still the most dominant instrument on display, and Moffat is still crafting haunting tales of ageing regret and frustration. There is, however, something bizarrely hopeful about The Most Important Place in the World at times. The album’s front cover, drawn by Moffat’s six-year-old son, is almost disarmingly cheery. The title, taken from an IKEA slogan, stands in firm opposition to the sighing acceptance of decay present in that of the last record.


Admittedly it is far from immediately obvious, upon listening to The Most Important Place in the World, that this vague ray of hope extends to the contents of the album itself. The lure of sex, here intrinsically tied up with the city, has been Moffat’s most used topic over the years, and veers in and out of focus here. The opening track, ‘On the Motorway’, introduces this as one of the record’s main themes with the line, “It’s not the look of love we lack, but the city wants to take me back; her doors are open, her legs are spread”. By the time of ‘This Dark Desire’ it’s everywhere: “Watch how she keeps their lies alive as they run through her veins and huddle in her holes”.

This duality between the city and lures of the flesh reaches a climax of sorts on ‘The Unseen Man’, the clear album highlight. Moffat is in the club bemoaning the “baby faced boys… in their sisters' clothes and unnecessary spectacles” whilst deeming himself “]an unnecessary spectacle” and longing for “romance among the rats”. After all “it’s not a mistake if you don’t remember it”. It’s a classic track, and Wells’s arrangement captures the giddy drunkenness of Moffat’s lyrics perfectly with a skittish beat and some wonderful faux-stately piano. That ‘The Unseen Man’ is followed by the deliberately awkward ‘Vanilla’, in which Moffat narrates a couple’s flawed path to copulation and Wells provides the sleaziest musical backing on the record, only further emphasises the charms of the “Fuck going home” mentality of the previous track.

These two songs also adeptly hammer home the variety of feelings and atmospheres – from the ridiculous to the sublime – that Wells and Moffat are capable of producing. Falling somewhere in the middle is ‘Street Pastor Colloquy, 3AM’. At first it feels like a mistake. The jaunty piano and upbeat percussion feel throwaway until, halfway through, the song transforms itself into some form of Caledonian gospel. Moffat leads a refrain that begins with “God only wants you when you’re down and lonely” whilst the saxophone hits overdrive in the background. It’s a wonderful moment, and supremely uplifting in its cheerful blasphemy.

By this time the cold morning sunlight has just about begun to seep through. The sense of withdrawal in ‘The Elven Year Glitch’ and ‘Far From You’ mutates into the grudging acceptance of closer ‘We’re Still Here’. As Moffat lists a series of departures (from a “euthanised” surgery to a job centre seeking “a new career”), one realises that, for this curmudgeonly pair, being here is the victory. In an era when everything’s turning to shit what more can we wish for than to outlast the transient, the feckless and the unnecessary? Isn’t that in itself a bit too much to ask? That’s hope for you.