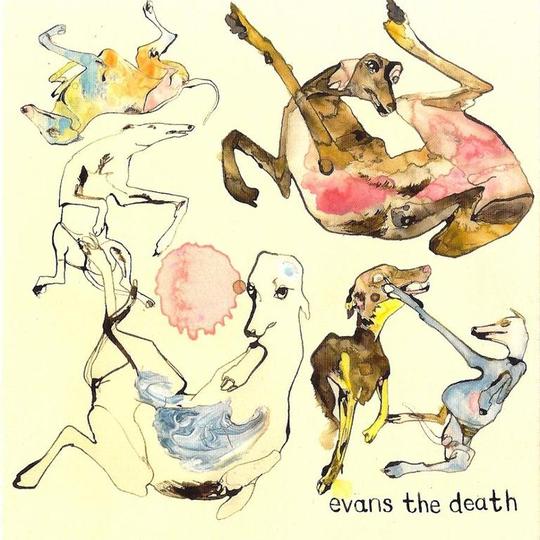 Three strands entwine in the DNA of Expect Delays, the second album by the preposterously young and eternally drunk London quartet Evans the Death. Strand number one is absolutely unshakable classic pop instincts: reviewers tend to note the Eighties indiepop influence on Evans, but their chart-attack tendencies go way deeper than that – it’s Sixties girl groups, it’s Seventies bubblegum, it’s Cilla Black, the Shangri-Las and the Ronettes. Whatever else orbits their music, Katherine Whitaker's cut-glass, effortlessly distanced and properly English melodies mean there’s a sugared heart to each track.

Strand two is a lyrical misery that comes straight from the bedsit. Whitaker is, to put it mildly, a bit down on herself. Expect Delays is the worn-down cry of a woman whose life is a bit of a mess. On ‘Intrinsic Grey’ she’s falling apart, she can’t escape the bleakness and she can “never be anyone else”. On ‘Idiot Button’ she “wakes up still drunk”, ‘Terrified’ is about night terrors, while on ‘Enabler’ she’s looking for someone who loves her enough to facilitate her bad decisions. It’s properly miserable stuff, delightfully at odds with the upbeat charm in the melodies, an age old trick used to great effect by everyone from the Smiths and the Cure to Bowie.


Strand three is the acid bath. Possibly to counter the purity of their pop, or the heart-on-her-sleeve confessions in the lyrics the band push their songs through a blender of phasers and flanges, reverbs and wobbles, using every Sonic-Youth-meets-My Bloody Valentine-meets-the-Mary-Chain trick in the early Nineties playbook. The guitars on ‘Terrified’ sicken and lurch, while ‘Clean Up’s straight-forward indie jangle crashes and jars against itself in a bracingly drunk swagger. Sometimes they’re going out of their way to be abrasive, ‘Don’t Laugh At My Angry Face’ delights in building itself up, disintegrating, dissolving and building up again. The four-piece feel constantly on the edge of falling apart, and it makes listening to them an invigorating, edge-of-the-seat experience rare in such a pleasingly catchy collection.

Of course when you add Sixties girl-pop to English misery the spectre of the Smiths is never far away, and Morrissey and Marr haunt Expect Delays like a bequiffed Banquo. ‘Just 60,000 Days Til I Die’ is pure Queen Is Dead melancholia, and ‘Sledgehammer,’ from spiralling riff through thumping backbeat has “Johnny Marr woz ‘ere” written through it like a stick of rock. ‘Idiot Button’ goes further down the classic pop route than even the Smiths would have dared, summoning the ghosts of Burt Bacharach and Phil Spector and making them nurse a hangover in a filthy student bedroom. Like everything here it is absolutely, miserably and irresistibly glorious.

Listening to Expect Delays is like playing with a naked Barbie doll with bubblegum in its hair and a half melted face. This is a confident, electrifying, weirdo-pop stormer of an album that deserves your attention. If there’s one thing we can take away from 45 minutes spent in Evans the Death’s company it’s that the world is gruelling and unfair place, which is a shame because if there was any justice (and apparently there isn’t) 2015 would be their year. Brilliant.