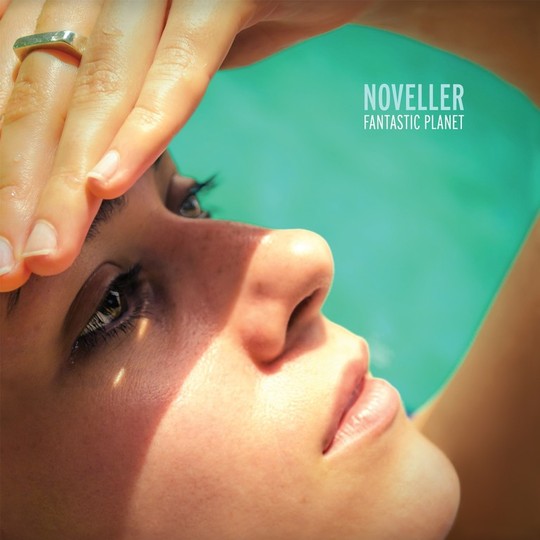 At first glance, Fantastic Planet looks throwaway. Its cover, adorned with a woman’s face in close-up, hand raised to shield her eyes from the sun, is entirely innocuous. Its title implies either banal cheeriness or a certain degree of wry sardonicism. Certainly there is little to recall the mysterious ambiguity offered by previous Noveller records – such as Glacial Glow or No Dreams – in just a brief look.

Is this meant to imply a significant break with Sarah Lipstate’s previous work under the Noveller moniker? Fantastic Planet certainly sounds sunnier than previous outings. Her ambient guitar work has always had a degree of cosmic tranquillity to it, but now the gentle waves of sound are more like the glisten of cobalt blue water at midday than the twinkle of snow in the twilight. More of a minor shift, then, rather than a major shift in policy. Listeners familiar with Lipstate’s oeuvre should not expect too much radical change in the feel of Noveller’s music.

The focus on movement also remains. It may seem a strange thing to say but Noveller records have always thrived on movement. Where many ambient/drone artists focus on sculpting the sound of stillness, Lipstate has used Noveller to explore subtle shifts in location and perception. Her guitar playing extends and retracts, leading her soundscapes in and out of the listener’s focus, retaining both the allure of abstraction and the comfort of melodicism. Occasionally, as on ‘Pulse Point’, the bright blue world that Noveller has painted for us threatens to erupt into monsoon, but the weather is reeled back in. The sun stays the course. The clouds dance their slow dance. The world shuffles on.

The most obvious thing to say about Fantastic Planet, then, is that it’s all very pretty. Even the brief descents into quasi-industrial territories are handled with such care that they retain the same pleasant sheen that characterises the rest of the album. Whether this is appealing or problematic rather depends on one’s own preferences, but there is no denying how polished and well put together everything is here. The flow is spot on, with everything coming to a drowsy, but powerful, sunset climax in the shape of ‘The Ascent’.

However, one has to wonder whether, ultimately, Fantastic Plane isn’t just a little too measured. Previous Noveller records have exuded a feeling of spontaneity, a feeling that Lipstate is being carried away by her own sounds. In contrast, throughout Fantastic Planet her music sounds ordered and restricted. It’s a sound that suits some but, given that previous Noveller records thrived on unfolding at their own pace, the jury is out on how far Fantastic Planet benefits from being constrained by its determination to fit preconceived structural limits.