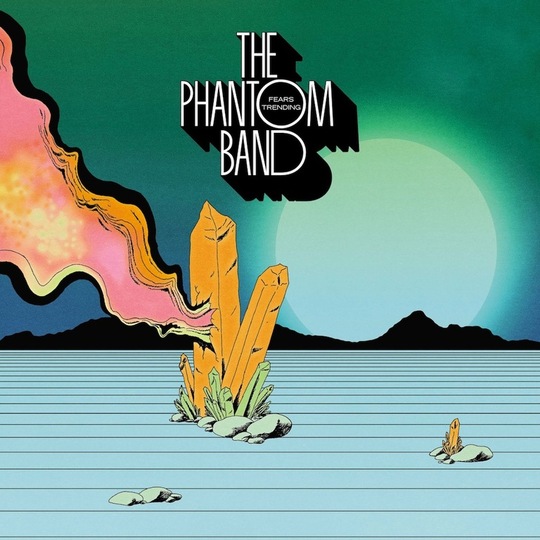 The Phantom Band have a delightfully erratic way of releasing albums. You spend years stomping your feet on the cold pavement of expectation and then two come along at once (almost). Fears Trending ambles in right off the back of its jollier cousin Strange Friend. Both albums were born largely from the same recording, yet their latest offering is a much darker, brooding beast. The upbeat, optimistic overtones from the 2014 album have been stripped away and Fears Trending is instead a mass of swirling, wary, melancholic music-making. Barely any of the seven tracks fade out before the five-minute mark. Each is a careful, unhurried collage of themes created and picked apart in mesmerising detail.

From the outset the album eases into a familiar Phantomy mishmash of synth-folk, with a guest appearance from fellow countryman and experimental folkist Alasdair Roberts adding his voice to the opening track ‘Tender Castle’. The moody guitars clash and contrast with the bright twinkling synths, simultaneously creating an unmistakeable Phantom sound whilst also pitching the unique gravity of this album. The self-assured nature of the song writing together with a brilliantly crisp and clear production also helps Fears Trending to stand out from their earlier releases.

Its dusky charm sings out most clearly on tracks such as ‘Local Zero’ and ‘Spectrelegs’. These songs never settle down, constantly shifting and exploring their own limits. The instrumentation is tumultuous and unpredictable, a running spar between synth and guitar, the melodies always shying away last-minute from an anthemic peak. And beneath these the echoing melancholy of the vocals is reminiscent of early-years The National. This shift and subterfuge at the core of the album reflects its position as the serious side of the Chem 19 recording session. Guitarist Duncan Marquiss suggest that “Maybe it’s the evil twin of Strange Friend.” It’s no coincidence, then, that the title is also an anagram of their 2014 release.

‘Denise Hopper’ is another stormer of a track. It is the tempest at the heart of the record in which the warmth of singer Rick Anthony’s voice washes over the tide of broken melodies in a style reminiscent of Scottsfolk Twilight Sad.

The only slight disappointment is ‘Kingfisher’, which perhaps does not do enough to warrant the seven and-a-half minutes given to it. The plodding bass drags its feet and there’s just not enough going on to hold interest. But, in walking the fine line between the experimental and more traditional elements of their sound, this is the only time The Phantom Band seemed to lose their footing. They have successfully resisted the need to rely on a catchy chorus or obvious hook to draw listeners in. Instead their skills lie in weaving together and stripping apart myriad layers of sound with a complexity that leaves something to be discovered on each new listening, always with a Nick Cave-esque brooding rippling underneath. The only constant is the deep, mellow drum tone that brings the band’s disparities together and creates a beautifully cohesive narrative flow.